So, stocks are falling. The major averages have officially entered correction territory.

Historical numbers should be taken with a grain of salt, but I do think it can help set baseline expectations. So, I had Nick Maggiulli run the numbers for me, and since 1950, the S&P 500 has declined 10% from its highs 25 times*. Twelve times it fell more than 20%**. Basically, a coin toss that a correction turns into a bear market. 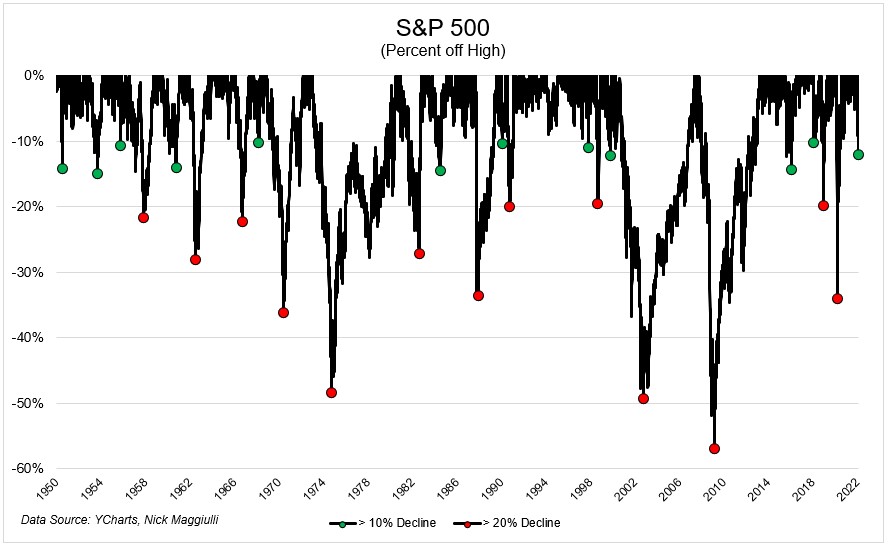 We’ll get to the data, but it’s important to point out that most investors don’t have all of their money in the S&P 500. And anyway, numbers don’t adequately convey the suffering being felt by some investors, so let me break it down this way.

Here are the bloody details.

The indexes are still okay. I mean, a 12% decline for the S&P 500 is pretty mild, especially after the run we’ve had. But, as we’ve discussed a million times, the pain is not evenly distributed. For small-cap investors, it’s absolutely brutal. One in three stocks in the Russell 2000 have been cut in half. One in ten are down more than 80% from their highs.

I think the declines this time make a lot of sense. First of all, it’s easy to lose sight of the fact that stocks have had an extraordinary run. Even with this fall, the S&P 500 has compounded at 16.7% over the last three years and 9.7% over the previous five years. Second of all, interest rates matter. The cost of capital is everything. Should investors freak out if the money goes from free to still ridiculously cheap? Maybe it’s an overreaction, but maybe not. If free money is what pushed companies to 100x sales, then yeah, it matters.

On top of the narrative shifting, you have companies offering less than stellar guidance for 2022. And the threat of war in Europe isn’t helping things either. For the most part, I think the selling here has been pretty reasonable.

So, what’s an investor to do? I want to share some thoughts from three of my favorite investors.

When the markets go haywire, you really have 3 options on what to do with your portfolio:

You don’t have to be an expert on geopolitics to invest.

You just need goals, and a plan to reach those goals.

It feels lousy to say “this is healthy,” given how many people are experiencing significant amounts of pain, but that’s how I feel. 2020/2021 wasn’t normal. Stocks going up every day is not healthy. Ringing out the excess is.

It’s never fun when stocks go down, but this is the contract that all investors sign. No downside, no upside. You just have to learn to live through it.

* There are many ways to measure a drawdown. For simplicity, I used all-time highs as a reset. So the 19% decline in 2011 isn’t captured in my data.