When we decided to mint an NFT for Animal Spirits listeners, we had three primary motivations; Raise money for charity, help put Audiograph on the map, and give our super fans something special.

A few years ago, my friend Tyrone Ross put me onto No Kid Hungry. I’ve been giving money to them every month (automated) for a while now. So when it came time to choose a charity, they were first on our list. The fact that they accepted ETH made the decision easy for us.

The first installation that we sent over to No Kid Hungry of 12.7 ETH was matched by The Giving Block. So that’s ~25 ETH, plus another six going their way, which puts us well over $100,000. This is one of the proudest achievements of my life.

Quinn from Audiograph emailed us in September 2021 trying to show us a demo of what he and his partners were building. We had seen a number of transcription companies over the years, but what made theirs special was the mission behind it. They wanted to make it easier for fans to engage with their favorite creators.

Step one was building an audio-based product where a listener could clip their favorite part from an episode and easily share it on Twitter. We loved the team and wanted to be involved, but weren’t excited about the business. The product was terrific, and we would continue to use it, but if they wanted us to be advisors and shareholders, we needed to see something different. After weeks of back and forth, Quinn sent me this Slack. 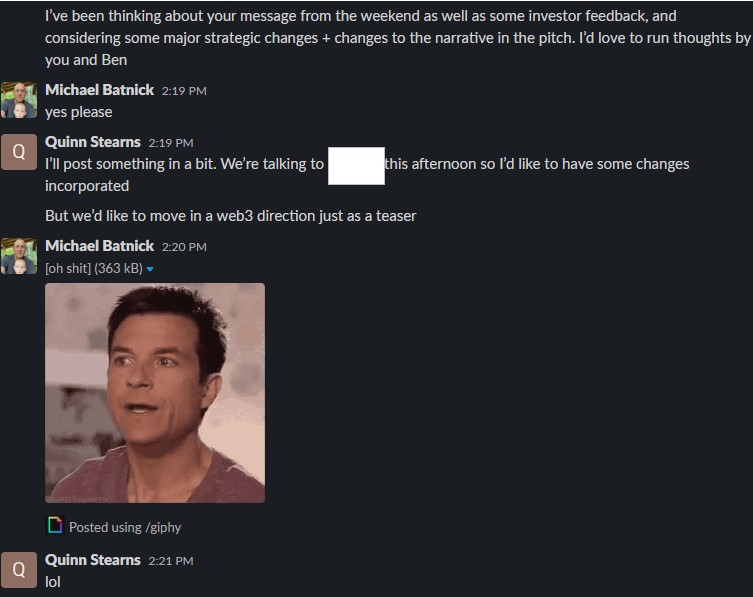 That night while driving upstate, Quinn and I spoke about different possibilites. We spent some time kicking around half-baked ideas about Web3 monetization for podcasters. The basic thesis was that podcasting is severely under-monetized and that crypto is the financial rails of the future. If they were going to build something in this space, doing it on the blockchain made sense. You can listen to the full story if you want. As far as getting Audiograph on the map, it’s hard to say mission accomplished, but we’re trying. Ben and I are proud advisors and shareholders.

The third thing we wanted to do with this NFT was give back to our audience who has given so much to us. When we started the podcast, we had no expectations of what it would become. To say that it has grown beyond our wildest imaginations is an understatement.

When we came up with a couple of ideas, Discord was the first thing the guys at Audiograph thought of. I wasn’t too excited for a few reasons. I found Discord to be too confusing and had bad taste in my mouth from being rugged on the first channel I joined. I also wasn’t thrilled with the amount of work it was going to be. My plate was already overflowing, and this seemed like a straw that would break the camel’s back.

What else could we do that wasn’t a huge lift on our end? Well, some fun NFTs were an easy place to start. 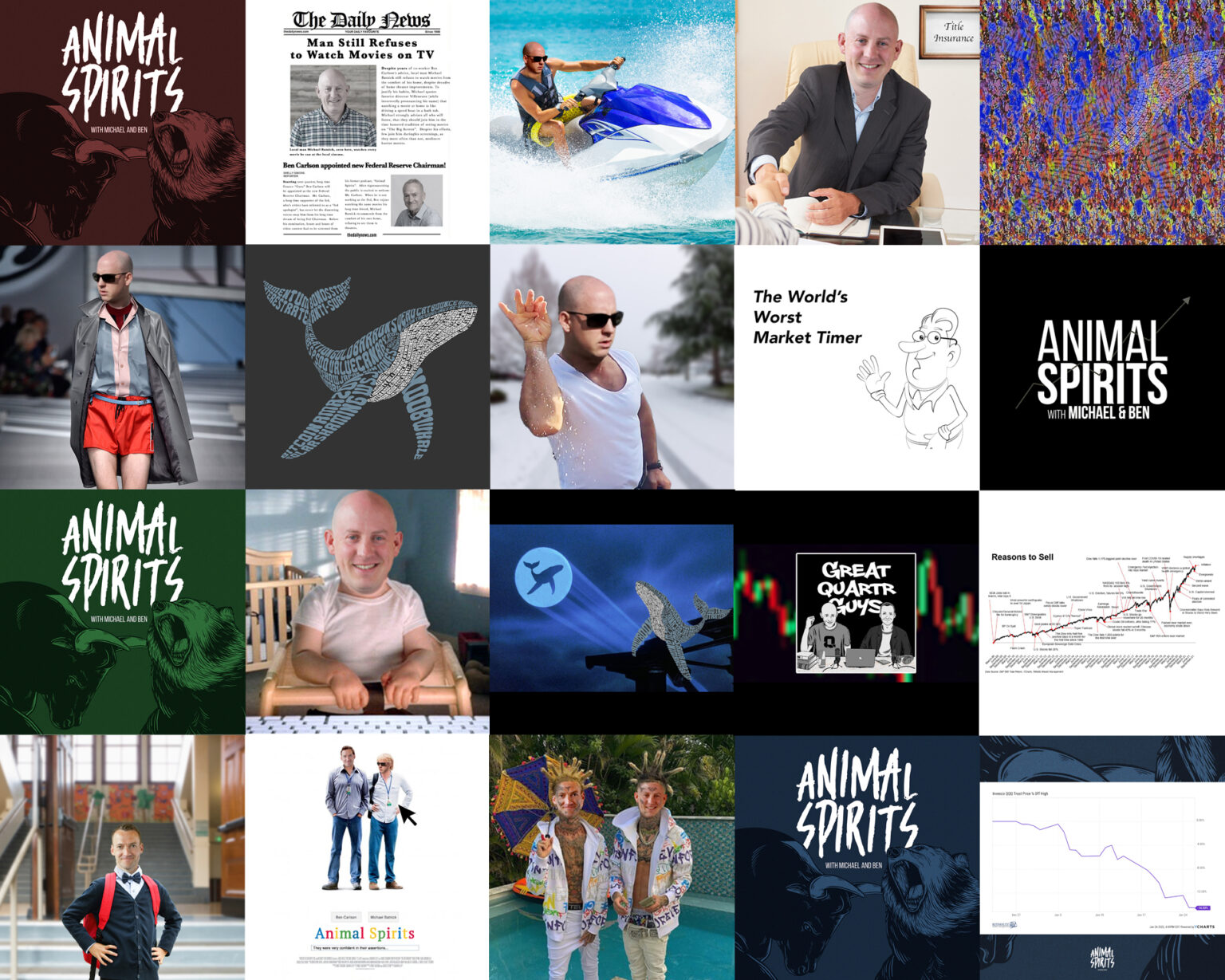 NFTs are a powerful tool because they’re digital keys. It lets people unlock content, in our case, all of our Google docs where our show notes live. The NFT also allows people, through Audiograph, to ask us one question a month. Ben and I will record a video answer, like Cameo. The NFT also unlocks the ability to listen to one live show a month on our podcast recorder, Riverside. And finally, the NFT opens access to our Discord. And this is the most valuable key of all.

I’ve been spending less time on Twitter lately, although I’m still hopelessly addicted. It’s just not a place that makes you feel very good for reasons that are obvious to anyone who spends time there. I’ve only been in the Animal Spirits Discord for a week, but my initial feelings could not be different than the expectations I had going in.

We wanted Sean, our Swiss Army Knife to spend time there on our behalf; Let us know if anything is interesting is happening and thank people on our behalf. That sort of stuff. Well, that won’t be necessary. The community doesn’t need us for it to work. Yea, if we go away, it’ll probably die out, but as long as we pop in and are engaged, the sky’s the limit.

We’ve got people talking about their careers and what they’re watching, and I totally get it now.

Twitter can be toxic because it’s people knifing each other all day for personal or professional motivations. On the other hand, Discord brings together communities of people with similar interests where the only motivation is to find people you can learn from and have fun with. In a world where people feel so disconnected, it’s not a surprise that community became the buzzword of the year.

I’m excited about where we go from here, and if you want to be a part of it, there’s still plenty of NFTs left, and all of the money will continue to go to No Kid Hungry. We’re excited to see you in the Discord, and thank you to everyone who’s participated.