You can learn a lot about what’s going on inside the market by just looking at some charts. Is the price going up, down, or sideways? Simple enough. But looking at something in isolation only reveals part of the story. If a bank is down 20% from its highs but the rest of the bank sector is down 40%, you would call this a relative winner.

Look at a chart of the FANMAG stocks and you’ll see that they peaked in November 2021, and have given up all of their gains back to September 2020. But once you compare the tech giants to the S&P 500, an entirely new image emerges. You can see that their relative performance peaked in July 2020 and all of their outperformance since the summer of 2018 has vanished. 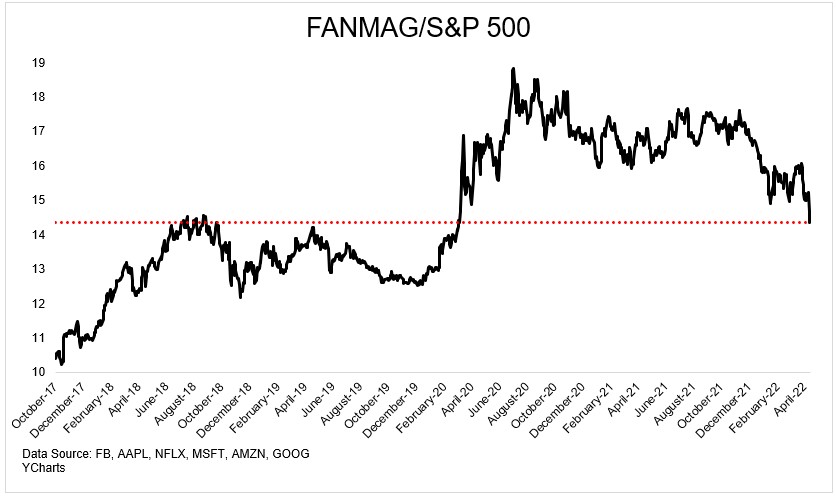 There are two different markets right now; Companies that got the benefit of low rates, versus companies that can handle rising rates. It’s all one trade and the simplest visual to express this trade is short duration bonds versus long ones. 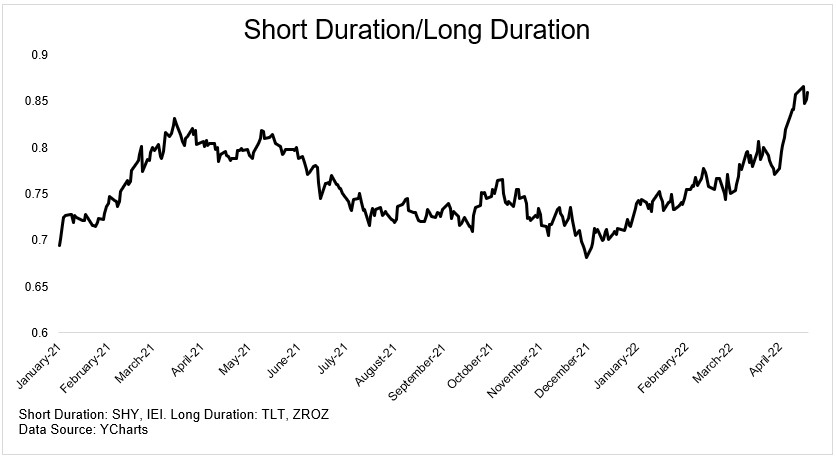 Short-term rates have risen more and faster than long ones, but the latter is more sensitive to them. This is why long-term bonds can see a fraction of the rate increase and four times the destruction as shorter-term ones. 3-7 year bonds are in a 10% drawdown while zero-coupon bonds are down 36% from their highs.

And this is what’s driving the market. When rates rise and inflation is high, investors are more sensitive to earnings today versus the potential of great earnings in the future. That’s why long-duration stocks are getting killed while cash-flow rich companies are holding up okay. 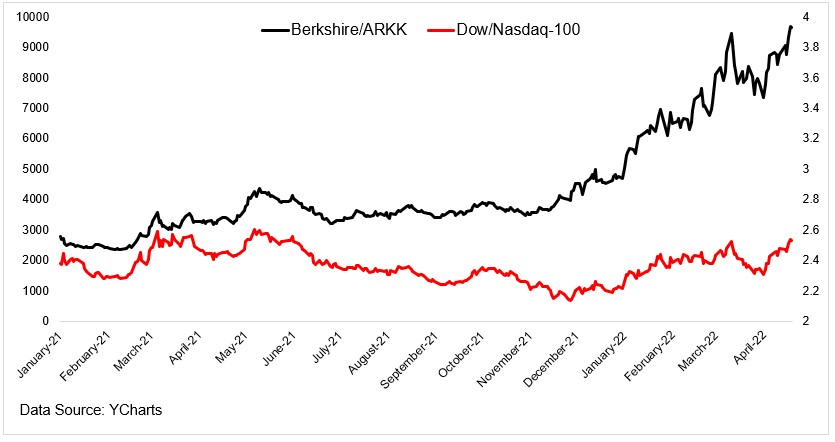 Nobody has time for disruptive technology during uncertain times when the incumbents are tried and true. We roughly know what JPMorgan is going to do and look like in the next couple of years, whether or not a recession comes. Buy now pay later is cool and all, but the business model is unproven and investors aren’t willing to subsidize losses when money actually costs something. 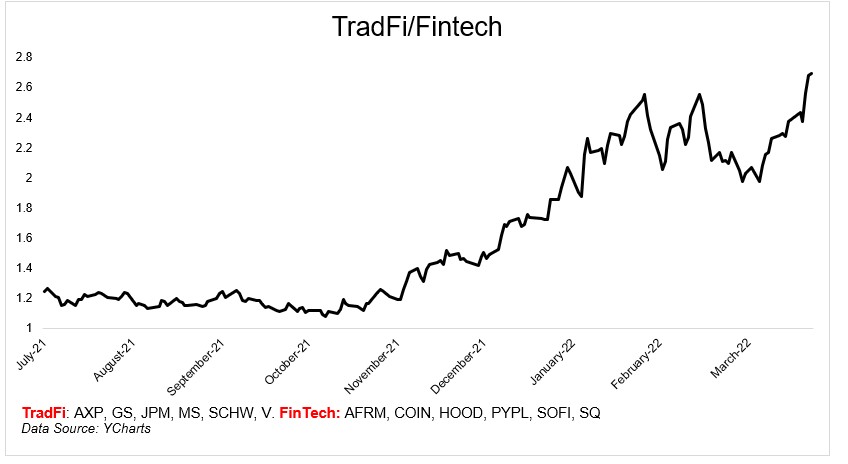 Here’s more of the same. 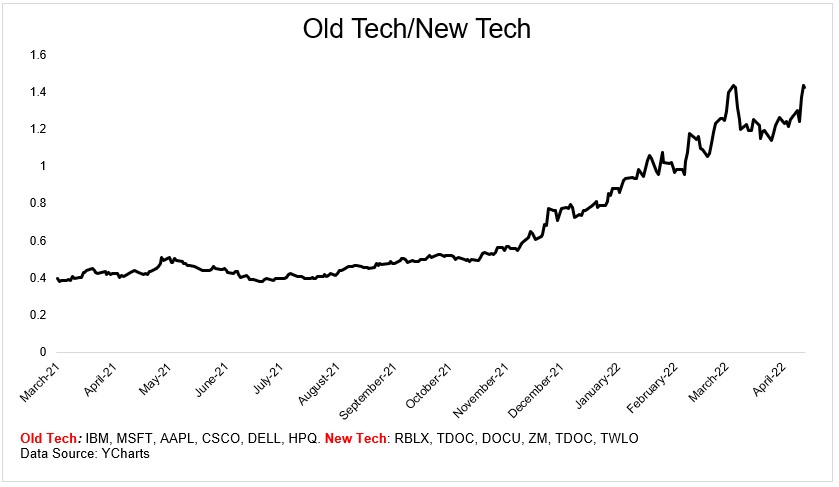 IBM might not be growing like it used to, but it still generated >$8 billion in free cash flow last quarter with $700 million hitting the bottom line. Robinhood burned through $400 million in cash and lost nearly $1 billion. Investors are like, “Umm, yeah, we’re not doing that anymore.”

In an inflationary environment, consumers and investors value physical items. CF Industries, one of the largest producers of fertilizers, is up 36% on the year. Facebook, I mean Meta, is down 45%. 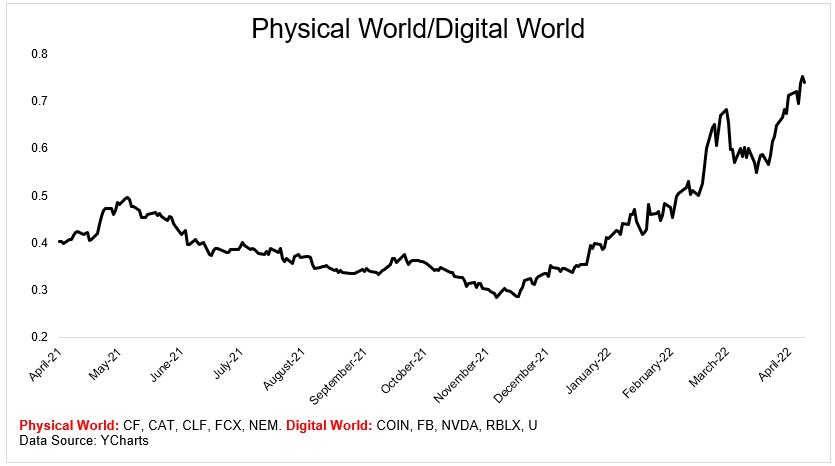 One of the areas of the market that’s most sensitive to rising rates is homebuilder stocks. While they’re down 20 and 30%, build-to-rent names like Invitation Homes and American Homes 4 Rent are basically flat on the year. Absolute duds, but relative home runs. 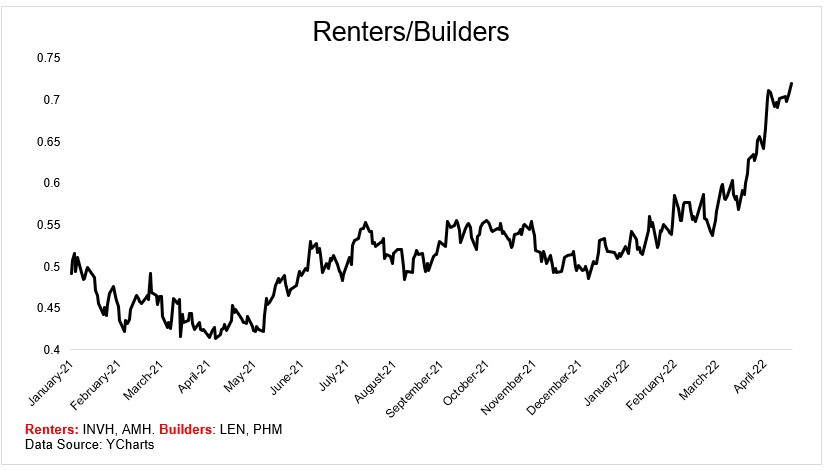 On the podcast this week I spoke about how Disney was flat since 2015. I know the challenges that Disney has gone through and continues to struggle with, but seven years of no returns really blew my mind. And then I saw Jim Bianco tweet this and my head almost exploded. Disney has underperformed the S&P 500 since the inception of SPY (1993), and basically on every other time frame as well. 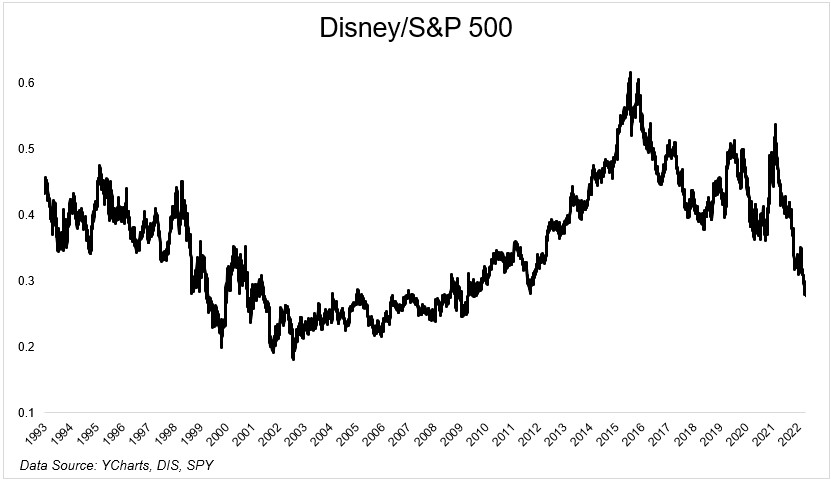 Some people might see this and say, “This is why you shouldn’t pick individual stocks.” I get that and I mostly agree. Disney is one of the most iconic companies in the world, and even that wasn’t good enough to beat the index. But for me, the more salient point is to diversify. Don’t put all of your eggs in one basket. It’s okay to buy actively managed mutual funds, but I wouldn’t recommend putting your entire net worth in three or four stocks.

The market isn’t fun right now and it’s all being driven by interest rates, inflation, and the fear of a slowing economy. That’s the bad news. The good news, and I’m admittedly reaching here, is that a lot of stocks already got pancaked. Meanwhile, nobody is bullish, and good things tend to happen when most investors think they can’t.

Next week is a huge one for earnings, which certainly feels like a make-or-break moment for the markets. We’ll hear from Google, Facebook, Microsoft, Apple, and Amazon, as well as D.R. Horton and Chipotle, and Caterpillar. If you want to listen to earnings calls like a podcast, check out the Quartr App, it’s terrific. Slides embedded in the app, 1.5x speed, skip to Q&A, fuhgeddaboutit.

Have a great weekend.