Netflix is the leader in streaming, with ~221 million paid subscribers around the globe. But there comes the point when everybody who wants something has already bought it, and that’s where Netflix finds itself.  In the chart below (red line), you can see that their growth is slowing dramatically. 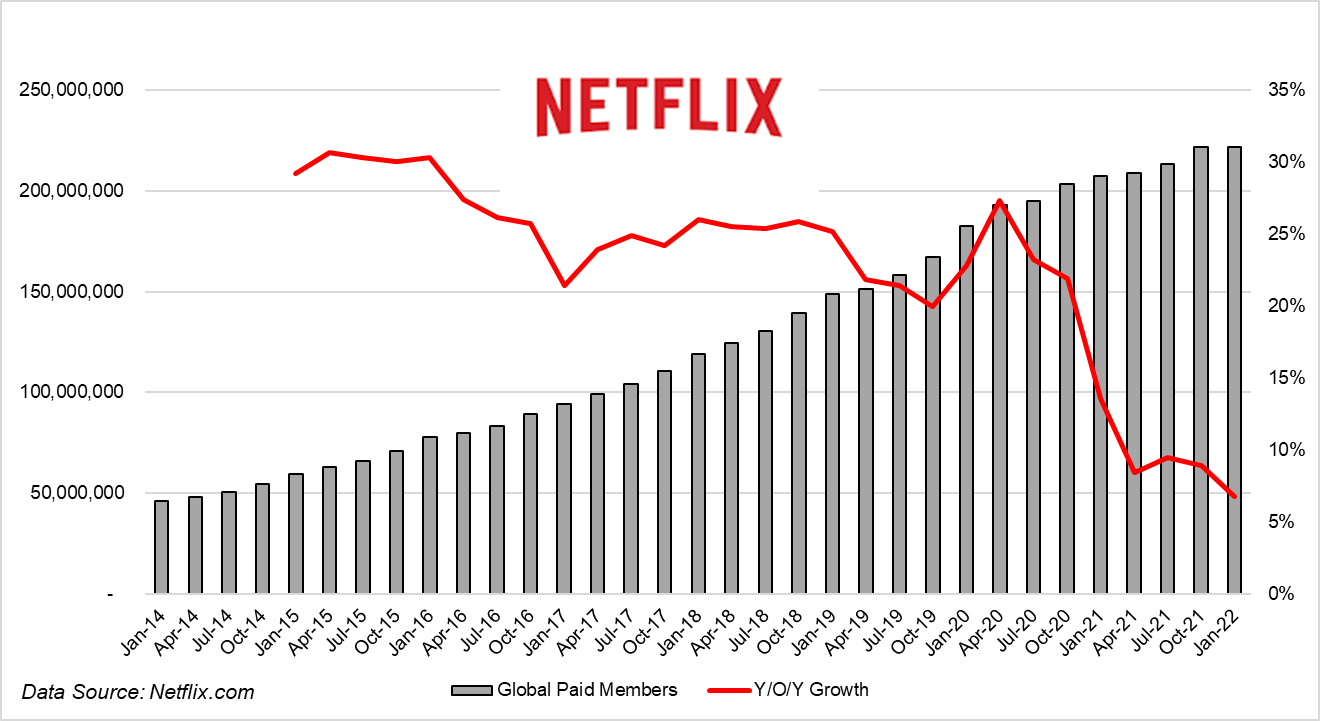 For the first time in a decade, Netflix has fewer subscribers than it did in the previous quarter. They reported 200,000 fewer paying subscribers this quarter versus last, which is around $54 billion in market cap worse than the 2.5 million they expected to add.

Netflix has an obvious problem that it didn’t have to deal with when the company was still adding new paid users. But now that growth has slowed and gone negative, it seems unimaginable that they didn’t deal with it earlier. The problem was an easy can to kick because who wants to deal with problems when you’re having nothing but success?

I was listening to the conference call and had my face blown when I heard Reed Hastings say:

“And as we put in the letter, COVID created a lot of noise on how to read the situation, boosted us a lot in 2020. And then in 2021, I think we thoughtfully said it was mostly pull forward, which was the logical conclusion. But now, coming into 2022, that doesn’t really hold. So then pushing into it, we realized, with all of the account sharing”

Woah, I thought. “We realized with all of the account sharing.” You’re first now realizing that?!? But then he finished his sentence, and it turned out that my knee-jerk reaction was unwarranted. Of course they’ve known about password sharing:

“We realized, with all of the account sharing, which we’ve always had, that’s not a new thing, but when you add that up together, we’re getting pretty high market penetration. And that, combined with the competition, is really what we think is driving the lower acquisition and lower growth. So on the 2 parts, we’re working on how to monetize sharing. We’ve been thinking about that for a couple of years. But when we were growing fast, it wasn’t the high priority to work on. And now, we’re working super hard on it. And remember, these are over 100 million households that already are choosing to view Netflix. They love the service. We just got to get paid at some degree for them.

I don’t want to speculate what they might do to address this. I’m guessing they don’t yet have a fully fleshed out plan. But I want to talk about the idea that growth hides many flaws. This is a powerful concept that applies to life and obviously businesses.

There are only so many hours in a day. Only so much money on the balance sheet. Only so many ideas you can focus on. I don’t have any great insights, but Hastings got me thinking about some of the flaws that will be exposed if and when the economy finally does slow down. What happens when a sailboat’s in the middle of the ocean and the wind completely disappears?*

Asset managers and financial advisors, for example, have had the wind at their backs for the last decade. Some of these businesses will learn that growth hid a lot of their flaws if we get a couple of lean years.

I want to say one more thing about the Netflix story: I take my hat off to Bill Ackman. In my book, I wrote about Ackman’s big mistake of being so public with his investments (Herbalife, Valeant, etc). Nobody likes to admit when they’re wrong, even about things that really don’t matter. Acknowledging you were wrong when you’ve got billions of dollars on the line, and you laid out an investment thesis just months earlier is almost impossible. But that’s just what Ackman did. In a letter last week, he wrote:

“One of our learnings from past mistakes is to act promptly when we discover new information about an investment that is inconsistent with our original thesis. That is why we did so here.”

Success hides many flaws, but eventually they’ll get exposed because nothing grows forever.

*I’m not a boater. Maybe this isn’t a great analogy.