It was another ugly day on Wall Street.

Coinbase was 71% off its highs as of Friday. Today it fell another 19%.

PayPal’s market cap was $220 billion at the beginning of the year. Today it’s $92 billion.

Spotify fell 10% today to an all-time low. It came public four years ago.

These names all have one thing in common, and that’s the bucket investors place them in. And that bucket is the same one that investors couldn’t get enough of for the last couple of years. It’s the bucket that’s done so well that its counterpart was repeatedly called “dead.”

The outperformance of growth over value has been historic. For 14 out of 15 quarters from 2017 through 2020, value underperformed growth. Why own Anadarko when you can own Apple? Why own Newmont when you can own Netflix? 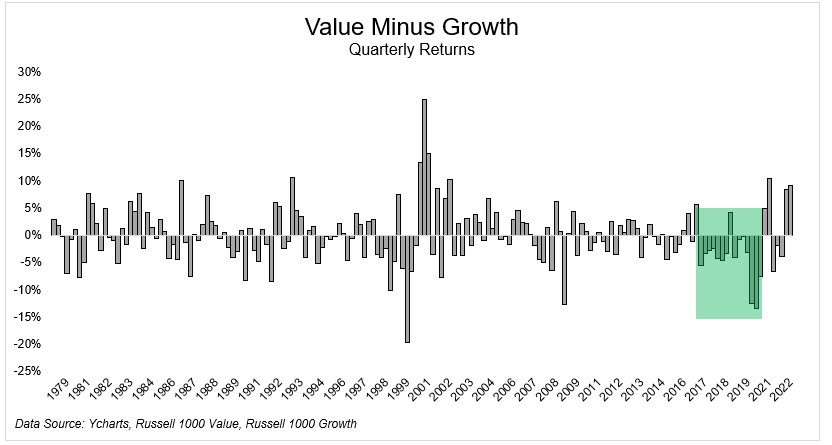 When money costs nothing, you’re less sensitive to when you are repaid. And so investors gave certain companies the benefit of the doubt. As long as they grew their top line at 20% a year,  investors were happy to subsidize losses.

That mentality reached a fever pitch in 2020 when growth stocks gained  37% while value stocks gained nothing. That was the worst year ever for value relative to growth, including 1999. 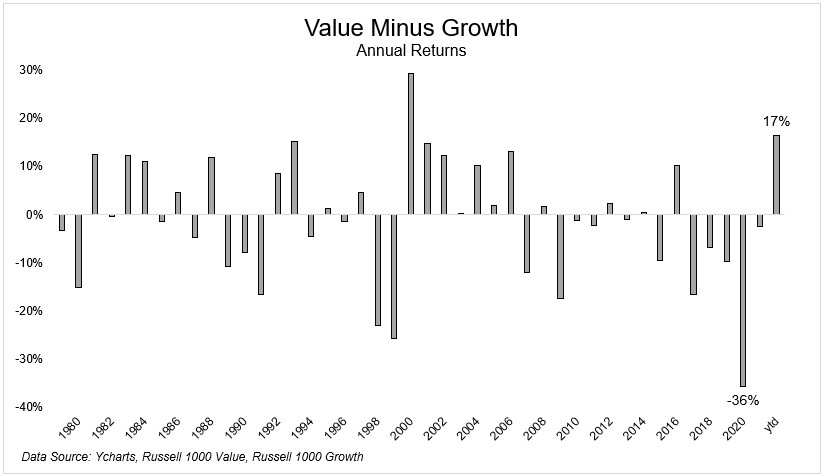 But everything in the market is temporary, even when it feels permanent.

Today, most of the screen was red, but some of it was green: Campbell Soup, Clorox, J.M. Smucker, Kimberly-Clark, 3M, and Sherwin Williams, to name a few.

As we shifted into an inflationary environment with rising interest rates, investors grew more sensitive to fundamentals. Investors have no appetite for high duration bonds, and they’re avoiding high duration stocks like the plague.

Large value/large growth is back to where it was at the beginning of the pandemic. Small value/small growth is at the highest level since early 2017. 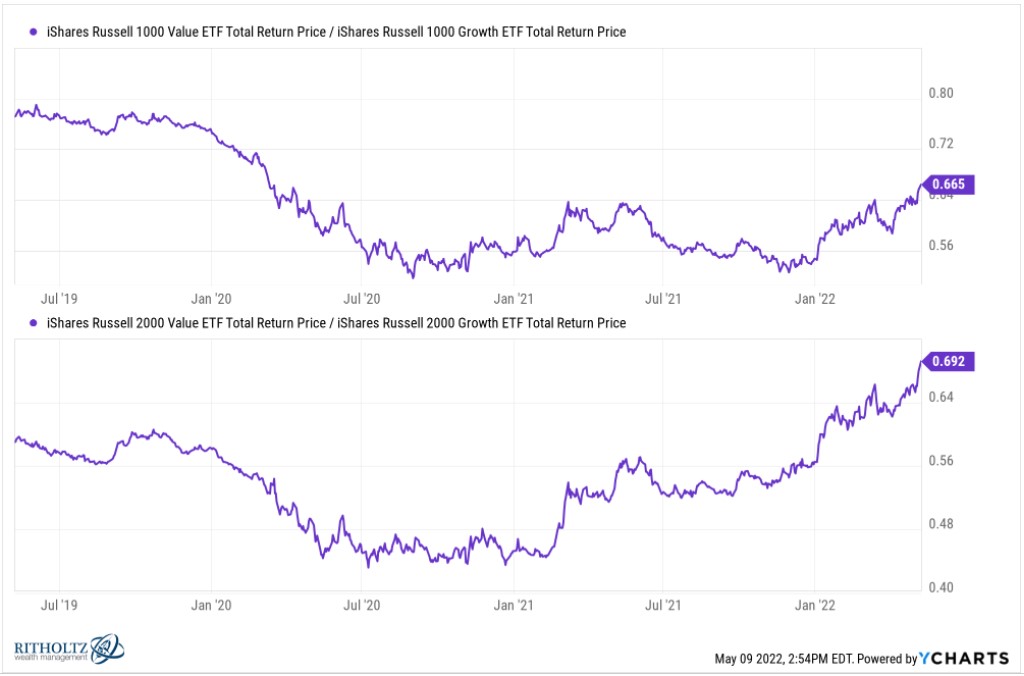 We see the same dynamic playing out across the globe, both in developed and emerging economies. 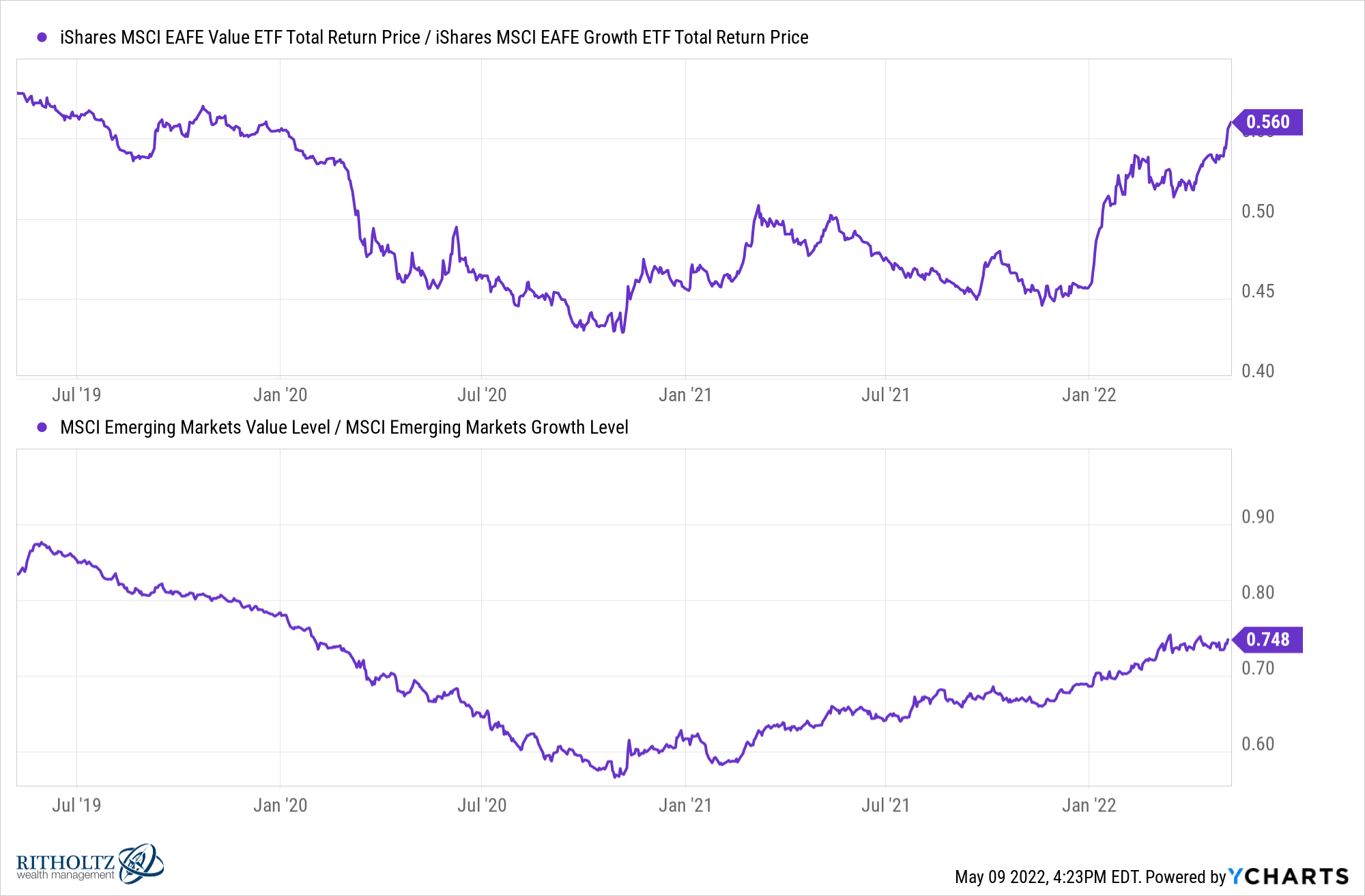 Doesn’t it seem so obvious in hindsight? Well, some of it was.

In December 2020, I wrote “this is madness. Making money in the stock market is not supposed to be easy.” I’m not taking a victory lap. I said what most people were saying. And maybe that’s the most surprising part about all of this; that so many got it right.

What people didn’t see coming, at least I didn’t, was the blue chips getting destroyed. Amazon is down 41%, the deepest drawdown since the great financial crisis. Facebook just fell nearly 60%, its largest decline ever. Netflix is trading at 25 cents on the dollar. And all the while, the S&P 500 is still not in a bear market. At least not yet.

If you saw a list of the growth names and how far they were from their high, you’d guess the index is down, I don’t know, 30%? Because it would have been hard to imagine a scenario where that happens and Exxon and Chevron, $700 billion of market cap, are up 50% on the year. Where Lockheed Martin, a $116 billion company, and Bristol-Myers, a $160 billion company, are each up 25%.

The idea that value stocks would buoy the index while growth crashes would have seemed far-fetched twelve months ago. But here we are. Value is alive and well.

*Aaaaactully, with oil negative, I’m not sure how obvious this one was in real time.