My wife turned on Good Morning America the other day and here’s what the show led off with: A mall bombed in Ukraine, 53 migrant workers dead, the attack on Capitol hearing, Walmart sued by FTC for fleecing customers, and a man from Minnesota who vanished in Ukraine.

Oh. My. Lord. Is there not one good piece of news to report on?

George Carlin was wise to this forty-five years ago. The news business is really the advertising business. They get paid to attract as many eyeballs as possible, and nobody tunes in to hear that everything is fine. Rainbows don’t attract attention the way a fire does.

Nobody likes a more volatile news cycle than the financial media. My friend Phil Pearlman calls this “the higher the Vix, the higher the clicks.”

Having a blog, I possess firsthand knowledge of this phenomenon, but I never looked at my traffic before to confirm it. Confirmation secured. This first chart shows my daily page views overlayed with the Vix. Not perfect, but pretty tight.

This next one tells you all you need to know about incentives and why all news companies follow the “if it bleeds it leads” moniker. I looked at my average daily page views by Vix regime and sure enough, my traffic is significantly higher when the market is falling (Vix rising). Tell people that everything is going to be fine and nobody will listen. Tell people that things are bad and getting worse and you can build a large audience.

We spoke about this on TCAF with Felix Salmon. Another thing we covered was where we are in the cycle. Here’s my read of it. For the last decade, risk has been rewarded with returns. And the longer it went on, the longer people felt like it was going to continue. And in fairness, it did go on a lot longer than people thought. I mean, every year we had people calling for the bull market to end. And it did, eventually. We’re on the other side of all of that now. Most of the nonsense is gone. Even excellent businesses like Amazon are down more than 40%. 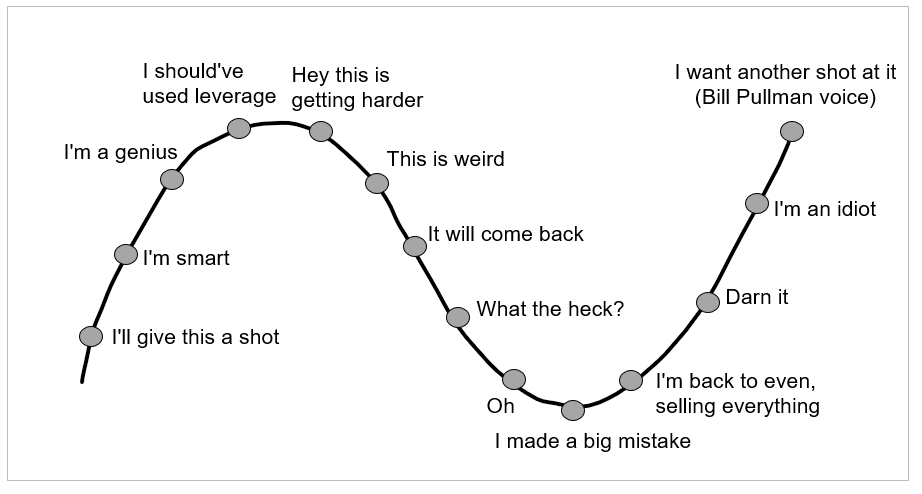 I don’t know that we’re near the bottom, this chart is for illustration purposes only, but you know what I mean. We’re at the part of the cycle where everyone seems to realize that things are fundamentally different today than they were when the year started. And while this chart’ is viewed through the lens of an investor, this is everyone’s experience right now; Individuals and corporations, workers and CEOs.

Mark Zuckerberg just told his employees “If I had to bet, I’d say that this might be one of the worst downturns that we’ve seen in recent history.” In preparation for Zuckerberg’s Q&A, each Facebook employee received a memo from Chris Cox, Chief Product Officer. In it, he wrote: “I have to underscore that we are in serious times here and the headwinds are fierce. We need to execute flawlessly in an environment of slower growth, where teams should not expect vast influxes of new engineers and budgets.”

Bed & Bath has been in a world of trouble for a long time, but now things look really bleak for the struggling retailer. On their most recent earnings call, a board member said: “The macro environment right now presents a number of challenges for our business. A convergence of factors and the serial nature of them is unparalleled in my years of experience in the consumer sector.”

This week, Restoration Hardware provided an update on their outlook for the rest of the year: “The deteriorating macro-economic environment has resulted in lower than expected demand since our prior forecast, and we are updating our outlook, particularly for the second half of the year.”

You know when you look back at charts and say:

“Imagine getting the chance to buy Disney down 53%?”

You only get those opportunities during the “oh, shit” part of the cycle. We’re in it.

Not all of us can be greedy when others are fearful, but for those that have the money, the stomach, and the patience to swing, we’re seeing some fat pitches out there.

Here’s our conversation with Felix Salmon. Hope everyone has a great weekend.