This is the weirdest market and economic environment of my career. Michelangelo wouldn’t be able to paint a clear picture of it all. You should always be wary of people with strong opinions about the future, but maybe never more so than right now.

Here’s my best attempt to explain where we came from and where we are today.

Consumer prices started to take off in the spring of last year as the economy was taken off life support and started running sprints. There was a lot of debate about whether or not the increases were transitory. They weren’t, and we’ve seen nothing but further acceleration, with the most recent reading hitting a blistering 9.1%, the highest number in over forty years. 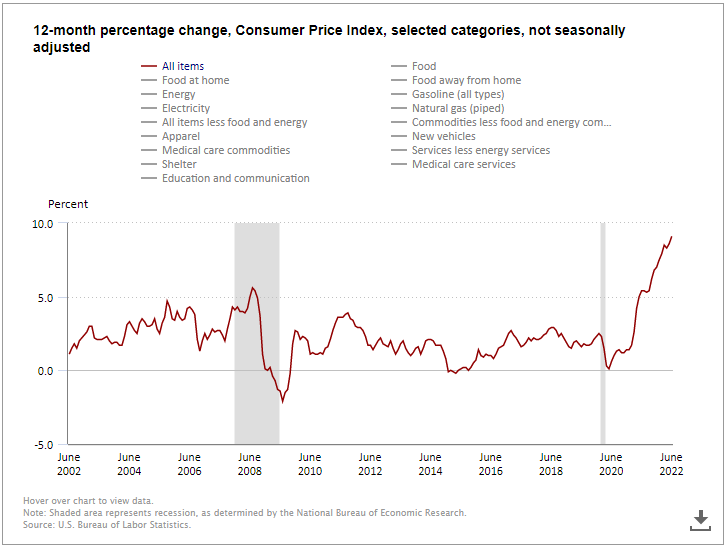 To help alleviate pricing pressure by cooling off demand, the fed raised rates four times this year with the intention to continue raising until prices come down.

Rising prices destroyed consumer confidence, and falling stock prices destroyed investor sentiment. Homebuilders are in on the misery, with sentiment falling in July by the most in 37 years, except for April 2020.

The stock market is generally forward-looking, but let’s be honest, it doesn’t always get things right. It didn’t do a great job sniffing out inflation, for example.* CPI first crossed 5% in May, and the S&P 500 didn’t peak until January. With stocks well off their lows, I’m wondering if they’re pricing in less bad earnings or peak inflation. Orrrr, maybe this is just a dead cat bounce, and I’m trying to find meaning where none exists.

Banks kicked off earnings season by telling investors that business and consumer credit was fine, never better in some cases. But nearly all of them told investors they’re preparing for a slowdown. Then we heard AT&T lower guidance and retailers like Walmart did the same. Snap pulled guidance, and we braced for impact to hear what Google and Facebook would tell us about the state of the advertising industry.

Stocks stopped going down in June and really started moving higher last week after we got some solid numbers from companies that shared their second-quarter results. Google reported 13% revenue growth, the slowest since 2015. Not great, but not nearly as bad as what investors had priced in, with the stock down more than 30% from its highs. Apple, probably the most important company in the world, reported record numbers for its June quarter. And travel companies told investors that they see no sign of a slowdown.

So, who do we listen to? Maybe banks are being conservative. Maybe retailers are blaming inflation when they mismanaged their inventory. Maybe Snap just can’t monetize their users, and advertising, one of the economy’s most cyclical areas, is actually okay. Google’s 11% revenue growth in that segment would seem to indicate it is.

This might sound obvious to the point of absurdity, but the easiest way to describe what’s going on right now is that some companies are being hit harder by macroeconomic conditions than others.

Based on what we’ve heard from earnings calls, and based on what we saw in the labor market, it’s hard for me to say that the economy was in a recession during the first half of the year, even with GDP falling for two consecutive quarters.

The big questions now are, has inflation peaked, are we going into a recession, can the fed pull off a soft landing, and what has the stock market already priced in?

Let’s take this one at a time.

We’ve started to see signs that inflation is coming down, even though the numbers haven’t budged yet. Commodities are coming in all over the place; Lumber is down 60% from March, and national average gasoline prices have been down 16% since mid-June. That’s all well and good, but on the other hand, shelter prices are still high, and nominal wage growth hasn’t slowed at all.

On the r-word, this is the Rorschach of all Rorshachs. I happen to think that, again, looking at labor markets and listening to earnings calls, it’s hard to make the case that we were in a recession during the first half of the year. At the same time, a case could be made that a recession is coming. And with the fed actively trying to soften demand, probably best not to overthink this one.***

Can the fed pull off a soft landing? Three months ago, I would have said no way. Now I think there’s a chance. There’s a debate on what the fed said last week versus how the market interpreted their words. The S&P 500 rocketed 5.4% in the three days since the fed spoke, leading Neel Kashkari to say:

In the 164 days from the peak on January 4th to the trough on June 16th, the market priced in a lot of bad news. The S&P 500 fell 23%, the Nasdaq-100 fell 33%, high-flying stocks lost 90% of their value, new listings dried up, crypto exploded, and investor enthusiasm nosedived.

Over the last couple of weeks, the news continued to worsen****, but stocks stopped going lower.

It has been 209 days since the S&P 500 peaked and 46 days since it bottomed. The question now is, was that the bottom, or just a bottom? 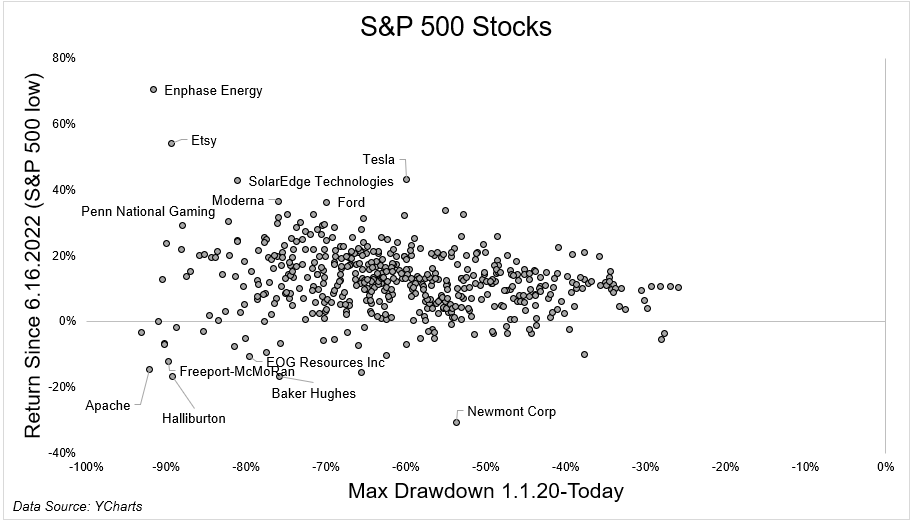 People might say that this could be indicative of a junky rally. I haven’t seen any evidence that market bottoms have to adhere to a certain set of principles, but in any event, this rally has been fairly broad-based.

To sum up, I’m confused. The best thing to do now is to stick to your overall investment philosophy, whatever that may be. And if you don’t have one, find one soon.

The markets aren’t always right, as mentioned earlier, but they’re definitely better at pricing risk than your stomach is. Do not let your big decisions be motivated by fear and greed. Listen, I’m human, I’m more optimistic now than I was in June, but you wouldn’t know that by looking at my portfolio. I already know what I’m going to do if the market goes up down or sideways. Said differently, try not to get distracted by the stock market.

I have zero confidence in my ability to predict the future, but if you forced me to give an opinion, a guess, it would be this; investors are overly optimistic after being way too pessimistic. A couple of weeks ago, Amazon had erased four years of gains. After falling 45% from its peak, the stock was where it was in 2018! Now Amazon and others like it are bouncing on backward-looking earnings numbers, indicating that investor’s previous forward-looking estimates were too pessimistic. Decent earnings are turning out to be good enough.

The future is never clear, but some times are hazier than others. Now is one of those times. Luckily for you and me, seeing the future is not a prerequisite for being a successful investor. Focus on what you can control; the rest will eventually take care of itself.

* I guess you can point to the high fliers peaking in February 2021 as a sign that they did, but again, inflation was above 5% for eight months before the broader indexes peaked.

***I Can go 2,000 words deeper on this one, but this post is already running hot

****I can spend another 2,000 words on this one. Some companies are doing well, others are scrambling, others are dying. Some think inflation peaked, some don’t. Some think the fed is getting ready to pivot, others think they’re still hawkish.