It took a little while to dig myself out of one of the deepest rabbit holes in all of finance, retirement spending strategies. William Sharpe calls it “the nastiest hardest problem in finance.”

Retirement, specifically early retirement, has been a hot topic lately, thanks to the FIRE movement and one of its biggest proponents, Mr. Money Mustache. He recently wrote a piece about retiring on a fixed chunk of money, where he said:

Let’s say you want to be able to spend $40,000 per year, for life, and have that spending allowance continue to grow with inflation. And you never want to make another dollar from work in your lifetime..If you start with a $1 million nest egg (a 4% withdrawal rate), you will very likely never run out of money.

It’s hard for me to get behind this idea because there are just too many unknown variables. You can model a 5% return on your investments, but as we all know, there is often a big gap between what the market returns and what investors receive. “Can’t I just buy an index fund?” Sure you can, but keeping up with the market is harder than most people think.

For the sake of simplicity, let’s start with the idea that you withdraw 4% of your portfolio and grow your withdrawals at 2% to account for inflation (both on a monthly basis). The table below shows how long you can do this before running out of money.

But here’s the catch, this table assumes you get this rate of return year after year after year. The real world is not so accommodating. The table above shows that you can earn 4% a year for 34 years before running out of money, but let’s look at what happens if a nasty bear market were to arrive as soon as you retire. The chart below shows one way in which an investor can arrive at a 4% CAGR over a 30 year period.

The danger of assuming compound annual growth rates when making long term projections can be seen in the chart below. The black line shows that spending a constant $40k annually, using the returns from the previous chart, an investor would run out of money in the 19th year. Spending 4% and assuming a 2% inflation rate, a more realistic assumption, an investor would run out of money in just 15 years.  Side note, if the returns above were to happen in reverse, in other words the bear market comes at the end of the period, an investor with the same spending would be left with $1.3 million.

The chart below shows how the 4% rule can go very badly. Because of the early deterioration of the portfolio, the 4% spending would actually be 10% in the fifth year. You can see how it quickly gets out of hand and why the account would run out of money.

If you were spending a flat 4% a year, starting with $1 million, you would still have just under $1 million after 30 years. However, with inflation and such wild swings in income, it’s highly unrealistic that anybody can support their life like this. So why even show this? I spent the time to make the chart and sunk costs are real. 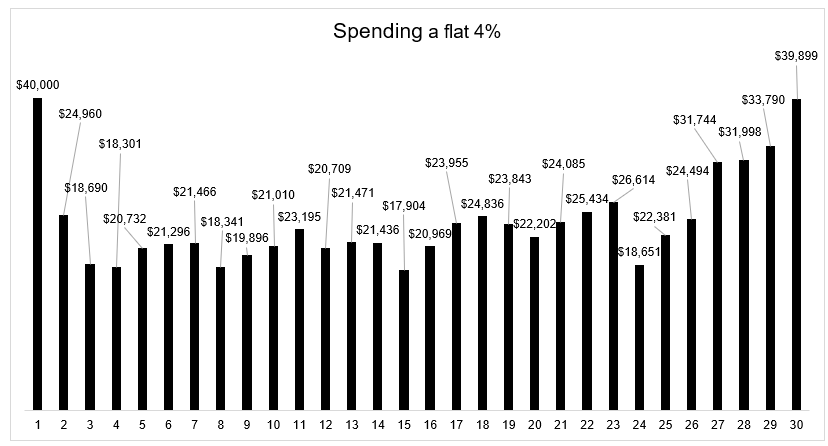 Change any one of these numbers and all of the assumptions get thrown out the window. It’s almost comical that people think a financial plan is a 100 page document. A financial plan needs to be updated because things in our lives change, and at the very least, expected returns turn into realized returns. We can do all sorts of historical modeling and future projections, but this type of stuff is so dynamic that it needs constant maintenance.

I haven’t even mentioned taxes or social security or medicare or really anything.

One reason why this early retirement movement can rub people the wrong way is it can get a little preachy. “I saved a million dollars, you can too, no excuses! It’s like the fitness gurus who have no sympathy for people who don’t have a small waist and a six pack. Okay, good for you, you’re exceptional, but it’s not that easy for the rest of us.

I don’t max out my 401(k). I save what I can while contributing to my child’s education, paying a mortgage and living my life. I’m certainly not looking for sympathy, I could max it out if I were willing to cut back in other areas, but I don’t want to. Right now, I feel very fortunate to have the choice to not live a frugal life.

I’m not ant-FIRE, I think it’s great that people like Justin McCurry who blogs at Root of Good, are out there showing the people who are interested, that there is a road map to early retirement. Justin wrote “By 2014, we had lifetime earnings of a little less than $1.2 million while our investment portfolio had grown to over $1.3 million.” This is incredible. It speaks to the powerful combination of discipline and compounding.

You should do whatever makes you happy. If living a frugal life that allows you to end the 9-5 grind twenty years early, then by all means do it. But be careful, because the hardest problem in finance is too complicated for simple rules of thumb.