We just witnessed the only recession in the history of this planet where the personal savings rate hit a 50-year high. This chart, which I think is the most important one from the last decade, comes from J.P. Morgan’s Guide to Retirement. 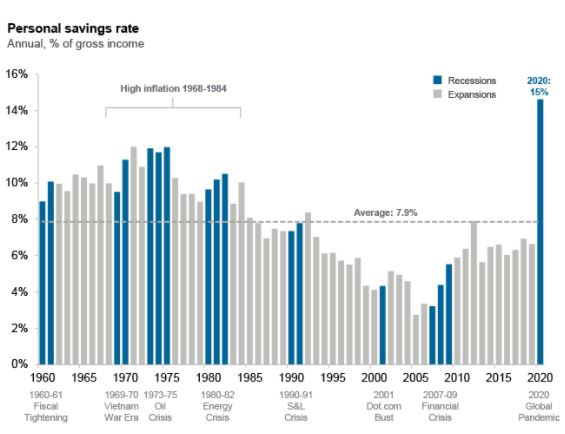 During a recession, the economy contracts, and people lose their job. And when they lose their job, they lose the ability to save money. But this was no ordinary recession. Yes, people lost their job, but they didn’t lose their income, thanks to a fiscal bazooka like we’ve never seen before. And when the economy closed, their spending declined to a fraction of what it otherwise would have been.  Add this all up, and you get this amazing result where the personal savings rate explodes.

Mathew Klein at Barron’s shows that Americans have saved $1.8 trillion more than they would have had we not experienced a pandemic. Wow. Just wow. 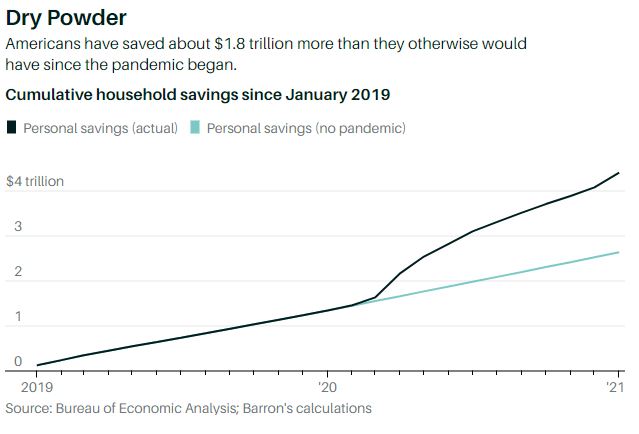 The CARES Act injected $2 trillion worth of relief into the economy. The Omnibus Appropriations Bill added another $1.4 trillion. Thanks to this, millions of families were saved from devastation.

It’s been a year since the Coronavirus changed all of our lives, but thank god the end is in sight.  Biden says there will be enough vaccines for every adult in America by the end of May.

To say that this is great news is an understatement. But to not acknowledge the potential economic risks we now face would be foolish. The saving glut will lead to a spending boom which might lead to inflation. And we haven’t even talked about the America Rescue Plan, which was just announced. This will add another $1.9 trillion on top of the $3.4 trillion we’ve already done.

I want to quickly point out some of the incredible features of the recent bill. On top of extending unemployment benefits and the direct payments to people making under $75,000 ($150,000 if married and filing jointly), we’re sending $800 million toward aid for homeless youth. $27 billion is going towards emergency rental assistance. This bill is also designed to fight child poverty.

Back to inflation. It’s worth pointing out that the people who are most vocal about rising prices are the same people who were worried about inflation following the GFC. The spending from those programs totaled $2.8 trillion. Money printing, as we learned, doesn’t automatically weaken our currency.

It’s also worth pointing out that there are obvious differences between then and now, and just because we didn’t get inflation last time doesn’t mean we can’t get it this time. First of all, the size of this program is just massive. In 2008, the stimulus was 5.5% of GDP. Today it’s 9.1% of GDP. Another obvious difference is that the stock market is at an all-time high. So are housing prices. And as I already mentioned, so is the personal savings rate.

When you combine all this with an inevitable spending boom, the danger of an overheating economy should be taken seriously. I, for one, think that this risk pales in comparison to the risk we would have faced if we did too little in the way of fiscal relief. I’ll happily trade an overheating economy versus a sluggish one like we saw following the GFC. Too much money in people’s wallets is better than too little. So now here we are.

I do think consumer prices are going to rise. In fact, I would be surprised if they don’t. Vacations, for example, forget about it. Hotels and Cruises haven’t done any business in the last 12 months. They’re going to see demand like they’ve never experienced, and I expect prices to reflect that.

But I think that this is one-time spending boom will lead to a temporary rise in prices which will settle back down as things get back to normal. Unfortunately, I doubt the stock market will wait to see what happens. If interest rates rise alongside consumer prices, it’s possible that we to get the chance to buy at much lower prices. And if the market overreacts, as Ben said, I think it will be a wonderful opportunity for those who can look past it.

What might cause me to reconsider? It’s all about wages. If we see a sustained rise in wages, then I’ll start to worry.

This might sound obvious, but I’m going to say it anyway. We can have inflation without having hyperinflation. Prices can rise without the dollar becoming worthless.

As far as your portfolio goes, you have to put yourself in a position to survive a wide range of outcomes. This isn’t just good advice for today. It’s always true. If we learned anything from last year, it’s to keep an open mind. Even if you know what’s going to happen, and let’s be clear none of us do, we still might get the trade completely backwards.

It’s comforting to speculate about the future, even if it’s a future we worry about. Mentally preparing for the risks before they happen is our way of pre-coping. It’s better for our sanity to plan for the worst and have an upside surprise than to be oblivious to the risks and get blindsided when it happens.

I take comfort in knowing that inflation is now the headline risk, and when’s the last time we saw the big risk coming?