You’ll frequently hear analysts on earnings calls preface their question by congratulating management on the quarter. They do this, says Marc Rubinstein  ” to win favour with management teams in order to gain private access at a later date.” But even the biggest kiss-ass in the world couldn’t possibly say that with a straight face on last night’s call for the company formerly known as Facebook.

Facebook did not have a great quarter. You could even say it went horribly. Minutes after the release, the company nosedived, vaporizing $200 billion in market cap.

The only congratulations on the call came from Sheryl Sandberg, who wanted to thank their team and partners for crossing $100 billion in annual revenue for the first time last year.

With Apple’s iOS changes and new regulation in Europe, there is a clear trend where less data is available to deliver personalized ads. But people still want to see relevant ads, and businesses still want to reach the right customers. So we are rebuilding a lot of our ads infrastructure so we can continue to grow and deliver high-quality personalized ads.

Being an ad platform, this is…not good. They estimated this headwind to be in the ballpark of $10 billion.

Facebook was one of the first social media giants. Inspired by their success, others followed in their footsteps. Here’s Zuckerberg describing the competition.

There are 2 things that I want to call out that aren’t having an impact on our business. The first is competition. People have a lot of choices for how they want to spend their time, and apps like TikTok are growing very quickly. And this is why our focus on Reels is so important over the long term

Monetizing Reels is proving to be difficult, as David Wehner, CFO, described:

Over time, we do think it’s a format that will work effectively for advertising, and we think the experience that we have for Stories will really lend itself well in the Reels format. So we’re confident in our ability to monetize over time. But right now, there’s relatively few ads in Stories — sorry, relatively few ads in Reels today. So it’s definitely something that, from an impression growth and monetization perspective, is going to be a headwind.

Speaking of growth, it’s not great. Daily active users declined for the first time ever. Gulp. 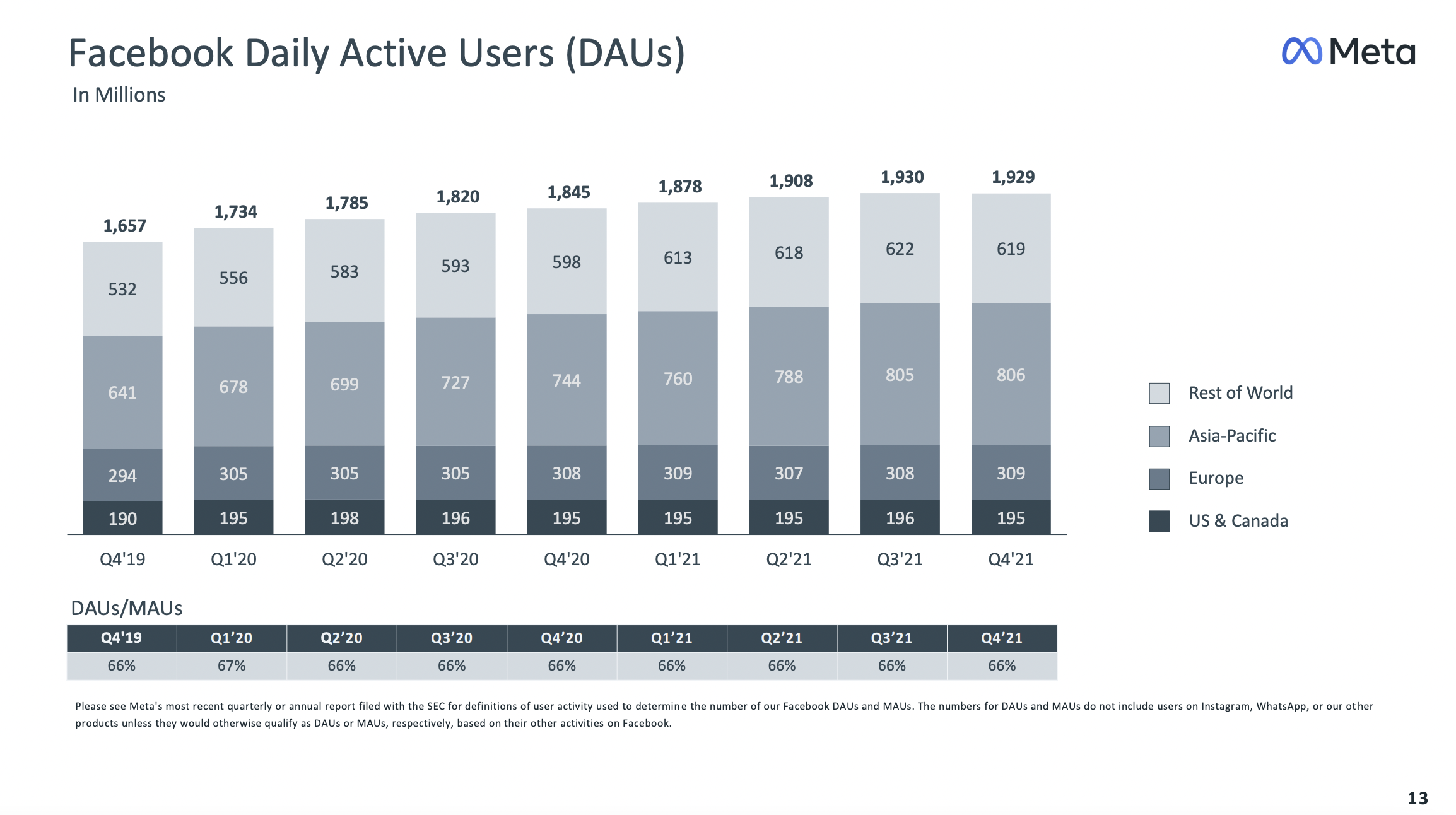 The transition to the metaverse is proving to be quite expensive. It cost them $10 billion last year.

And then there were the share buybacks. They repurchased $19 billion of stock in the fourth quarter. Why they would do that when they must have known how the stock would react after this quarter is puzzling.

Lastly, and this is a big one, is the whole “social” part of social media. Mark said

The balance of content that people see in feeds is shifted a little bit more towards stuff that isn’t coming from their friends, which they may discuss with their friends, but it’s kind of shifting towards more public content.

This means, according to Kevin Dugan, “that the voyeuristic behaviors that made social media as we know it so profitable — what are my friends talking about? Who did my high school ex marry? — were actually starting to fade.”

So yeah, not a great quarter, guys. The question now is if the reaction is overdone. The stock is down 23.5% as I type. That’s $210 billion in market cap, more than Intel and McDonald’s.

The company did report record revenue, up 20% y/o/y. And they’re now trading at 17x TTM income, 15x forward if we assume 15% growth. which is about as cheap as they’ve ever been. This seems like a wonderful business trading at a fair price, but if you’ll allow me to jam one more quote into this sentence, in the short term, the market is a voting machine, and oh boy are they voting.