Paul Samuelson once said, “The stock market has predicted nine of the last five recessions.”

At its low, the S&P 500 was 25% below its high. It’s hard to completely dismiss this as a leading indicator and I’m not here to do that, but while most drawdowns of this magnitude have led to economic contractions, they haven’t always. 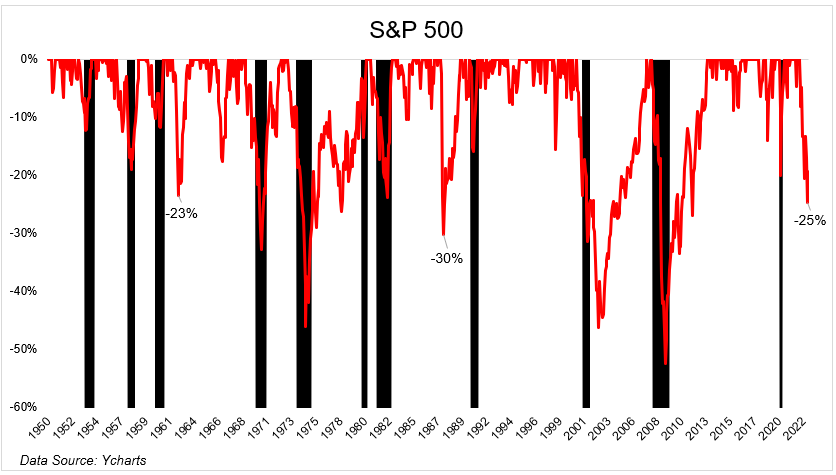 I jokingly asked Ben on the podcast this week if the stock market was gaslighting us? I wasn’t serious, but it got me wondering to what degree the decline in stocks has influenced our thinking about the economy’s future. Like, if we didn’t see stock prices and still got economic data and earnings releases, would we feel less certain that a recession is coming? I think we would.

Yesterday we learned that GDP increased by 2.6% in the third quarter, after declining during the first two quarters of the year. When we got those consecutive negative headlines, I didn’t believe that was enough evidence that the economy was in a recession. I just didn’t see how you could say that when unemployment was near record lows, and retail sales and corporate earnings were at record highs.

So but while the overall economy isn’t in a recession, there are undoubtedly areas of the economy that are.

The fed is trying to slow down price increases by raising rates which they hope will slow down demand. This type of thing takes a while for it to work its way through the economy. The housing market feels this first, and it is clearly in a recession today. Heather Long tweeted

“The Fed rate hikes have triggered a housing recession. There was a massive drop in construction in Q3 for both business buildings and residential. Residential investment in Q3: -26.4% –>basically as bad as spring 2020 when the pandemic first hit.”

Mortgage applications fell for a fifth straight week and are 54% below the 2021 highs. New single-family housing unit starts fell 20% y/o/y. A decline this large usually happens in a recession.

So the housing market was the first to go. Tech is second. Google and Microsoft are both down 10% in the two days following their earnings report. Facebook fell 25% today. Amazon is down 15% in the after-hours. Spotify is down 16% in the last two sessions.

I think the decline in the stock market is as much about the excesses coming out as it is about forecasting a recession. The multiples on money-losing companies look radically different today than they did a year ago. Spotify, for example, traded at 7x sales when interest rates were at 0. Now that we’re in a tightening cycle, 1.3x is where it’s at.

Are the earnings showing a recession, or are falling stocks making us think one is on the horizon? Apple, the biggest and most important company in the world just reported record revenue and net income tonight after the bell.

Apple’s CFO said “This is better than what we anticipated at the beginning of the quarter.”

Google also reported record revenue for the most recent quarter. But its third-quarter revenue growth was the slowest since 2013, it missed estimates, and when the fed is hiking, the market is less forgiving. It’s just that simple.

Facebook is getting destroyed, but does this have anything to do with the economy? They’re losing tons of money on Reality Labs, and Tik Tok is killing them. On their earnings call, Marc Zuckerberg said “It’s not clear that the economy has stabilized yet.” I know he said “the economy, “but he means Facebook’s economy. Advertising dollars haven’t stabilized. Competition hasn’t stabilized. But the tech economy is not the whole economy.

The housing market is in a recession and parts of tech are as well. But other areas of the economy, like travel and entertainment, are on fire. Royal Caribbean today announced “The Cruise Line Reports Reservations Reached a New Single-day All-time High in its 53-year History”

And here’s what Visa had to say in their earnings call:

In Visa’s fiscal fourth quarter, we saw a continuation of many of the spending trends present throughout 2022: strength in consumer payments, resilience in eCommerce and ongoing recovery in cross-border travel. These trends contributed to robust full-year 2022 results, with net revenues, net income and EPS all up more than 20% year-over-year, despite broader macroeconomic uncertainty and geopolitical turmoil.

There is a lot of conflicting signals out there, but I actually do believe the stock market. I think a recession is coming. But I also think the stock market might have exaggerated, leading us to believe that things are going to get worse than they actually will.

For people who watch the stock market, it is our barometer for everything. If stocks continue to grind higher, I bet your outlook for the economy will change.  I know mine probably will.