Who is the greatest investor of all time?

This is a question Ben, Josh and I tried to answer in the video below.

In doing some preparation, I pulled up a tweet I had saved from the artist formerly known as SuperMugatu. It contained a table that showed some of the best track records of all time (from the book Excess Returns: A comparative study of the methods of the world’s greatest investors 1st Edition) 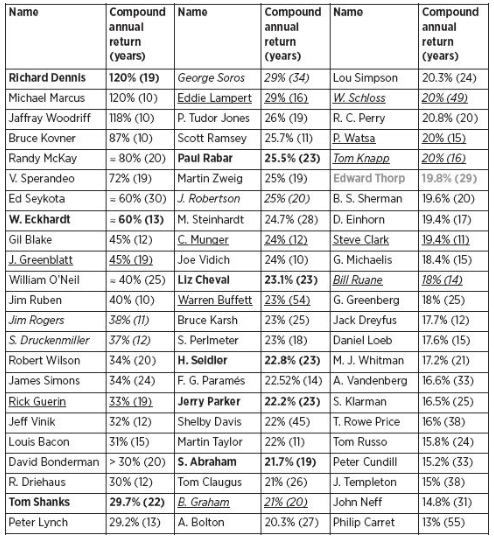 I’ve heard about Richard Dennis and his *Turtle Trading program, but I had no idea that his returns are, according to this table, the best of all time. For this reason, he was in my top five, along side Simons, Soros, Druckenmiller, and Buffett.

I wish I went back to his chapter in Market Wizards before this video, because after re-reading it, I’m not so sure that Dennis belongs on this list.

Here is a condensed version of his story.

Dennis borrowed money in 1970 to buy a seat on the Mid America Exchange, and began trading with just $400. In 1988, when he spoke to Jack Schwager, his net worth was estimated at $200 million. Wow.

Dennis was primarily a trend follower and experienced incredible success for the better part of two decades. But he ran into hard times in 1988, and during the midst of a 49% drawdown, he pulled the plug and closed his public fund. He told Schwager that each $1,000 invested in his fund would have been worth $3,833 when the accounts were closed, a 25% compounded annual return, which is obviously phenomenal.

One of the things that comes up when talking about great track records is luck and skill. If you have 1 million coin flippers, one of them is going to flip tails 20 times in a row, and not because they’re skilled at flipping coins. But I don’t know think this is an appropriate analogy. Of course money can be made by chance, but you don’t build a track record like the people above by getting lucky, because if markets are coins then they have an infinite number of sides.

Schwager asked Dennis how much of a role does luck play in trading. Here is how he answered:

In the long run, zero. Absolutely zero. I don’t think anybody winds up making money in this business because they started out lucky.

So maybe Dennis doesn’t belong in the top five, or maybe he does. This was a frivolous conversation, but fun nonetheless.