The best way to learn about anything new is with a story. One of my favorite ways to communicate how the stock market works to younger investors comes from this one in William Bernstein’s Four Pillars of Investing:

A superb metaphor for the long-term/short-term dichotomy in stock returns comes from Ralph Wanger, the witty and incisive principal of the Acorn Funds. He likens the market to an excitable dog on a very long leash in New York City, darting randomly in every direction. The dog’s owner is walking from Columbus Circle, through Central Park, to the Metropolitan Museum. At any one moment, there is no predicting which way the pooch will lurch. But in the long run, you know he’s heading northeast at an average speed of three miles per hour. What is astonishing is that almost all of the market players, big and small, seem to have their eye on the dog, and not the owner. 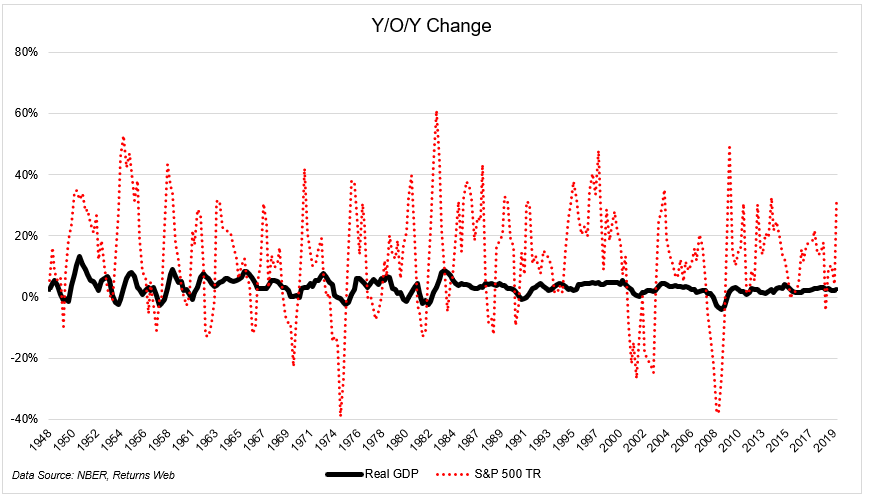 Stocks have come down at a record speed over the last few weeks, making people wonder if the decline in asset prices are foreshadowing a decline in the overall economy.

Paul Samuelson once said “The stock market has forecast nine of the last five recessions.” In other words, every time stocks fall, it doesn’t mean that the economy will follow suit.

You can see this in the chart below, which shows drawdowns in the S&P 500 with recessions overlaid.

The market is said to be forward looking, but that doesn’t mean that it always sees the future accurately. Investors are much quicker to act than consumers, so a decline in stocks doesn’t always lead to a slow down in the economy. It’s possible that we will enter a recession, or that we’re in one already, but we probably won’t find out until we’re already in the eye of the storm.