One of the themes that I keep coming back to over and over again is that even if you knew what would happen in the future, you still wouldn’t know how the market will react.

Take COVID-19 for example. If you knew that the economy would shut down, that millions of people would be unemployed and that hundreds of thousands of people would die, what would your prediction be for the stock market? You probably would have bet right on March and completely wrong on the rest of the year.

Which brings us to the election.

If somebody told you that the morning after election day we would still be tabulating the results, and that what looks likely is a Biden win with the Senate keeping the house, what would you guess stocks would do? Would anybody choose “best day ever after a presidential vote?” I know I wouldn’t. And yet, here we are. 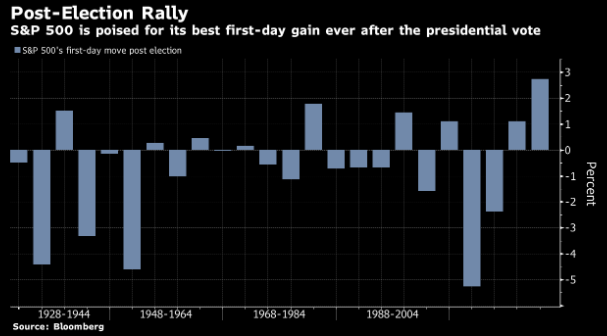 Knowing an outcome prior to the fact is impossible. Nine-year olds understand this. But there are still grown people who think they can, or maybe they know they can’t but their actions say otherwise. Or maybe they just lie to themselves in order to give them the illusion of control. I get it, fear and greed etc etc. As I said prior to the election, as long as you don’t go overboard, then no big deal. So what if your hedges cost you a few shekels? If they kept you in the game, then no harm no foul.

If, however, you did make a decision that is costing you more than a few shekels, then hopefully you will take something away from this experience. And that take away should be very simple; even if you knew what would happen in the future, you still wouldn’t know how the market will react.