“I can’t invest now. The stock market is too high.”

Everybody who has ever put a dollar into the market has had this thought at some point in time. But all-time highs are nothing to fear. In fact, returns are stronger after all-time highs because rising prices attract more buyers which leads to higher prices. This tends to continue until something comes along and knocks this cycle off of its course.

Unfortunately for investors, this argument, whether or not buying all-time highs is a good idea, cannot be won with data. Feelings are more powerful storytellers than numbers are. At all-time highs, our desire to protect the nest might perceive fear where it doesn’t exist.

I’m about to make a giant leap here but please go with it. Let’s say that you’re not just afraid of all-time highs, but so afraid that you’re going to wait for the market to crash before you start investing.

I want to talk about why waiting for a stock market crash is a terrible, terrible idea.

Waiting for the world to end is no way to go through life. Imagine waking up every morning, hoping for something bad to happen? That’s what you’re doing if you’re trying to implement a strategy like this.

Stocks don’t crash for no reason. They crash because something is harming the system. People are getting hurt, losing their jobs, losing their security, or losing their lives in the case of this year’s episode. You don’t want to have a smile on your face when this happens just so that you can potentially earn a few extra dollars or feel smarter than everyone else. Life is too short for this.

Like one of Nick’s readers said, too many people run out of time before they run out of money. Don’t spend your time waiting for the market to crash.

The idea that you’re going to swing at the fat pitch is deeply misguided. Take 2020, for example. The fat pitch came at us at 130 MPH. It was in the catcher’s glove before we could lift the bat off of our shoulder.

Remember the night of March 11th? That’s when the NBA told the players to go back in the locker room and the fans to go home. One of the players tested positive, and the game was canceled. That night we also found out that Tom Hanks and Rita Wilson had contracted the virus. That was the night that things got really real.

And with that, we were in a recession and a bear market. Stocks fell 10% the next day. That was your chance to buy.

It’s easy to look back now and say could should woulda, but stocks were in an absolute free fall. There was no telling when it would end. If you were waiting for this moment, congratulations, your worst fears were finally confirmed. This notion that you’re going to run into a fiery crowded theater when everyone is running for the exits is simply a case of you fooling yourself.

It’s incredible how quickly the buying opportunity disappeared. Just seven short days later, the stock market bottomed. True, you didn’t have to buy the exact bottom, but we slingshotted off the lows so quickly that you probably would have thought it was a dead-cat-bounce. The “prudent” move at that time, naturally, was waiting for stocks to roll over before scooping them up.

I’ve just given two reasons as to why waiting for a stock market crash is a terrible idea through the lens of behavioral investing. Let’s end this with some actual data. Let’s hold everything we know about how hard it is to buy, and just assume that you can buy when the time comes.

First of all, crashes just don’t happen that often. Since 1965, there have been only 8 drawdowns of 20% or more, once every seven years on average.

A few years back, Sam Lee looked at a simple methodology to demonstrate what a terrible idea this is.

“A simple version of the strategy is to wait for a 10% peak-to-trough loss before buying, then holding for at least 12 months or until the drawdown threshold is exceeded before returning to cash…for each percentage point of volatility buy-the-dip yielded 0.14% in additional annualized return and buy-and-hold yielded 0.34%.” 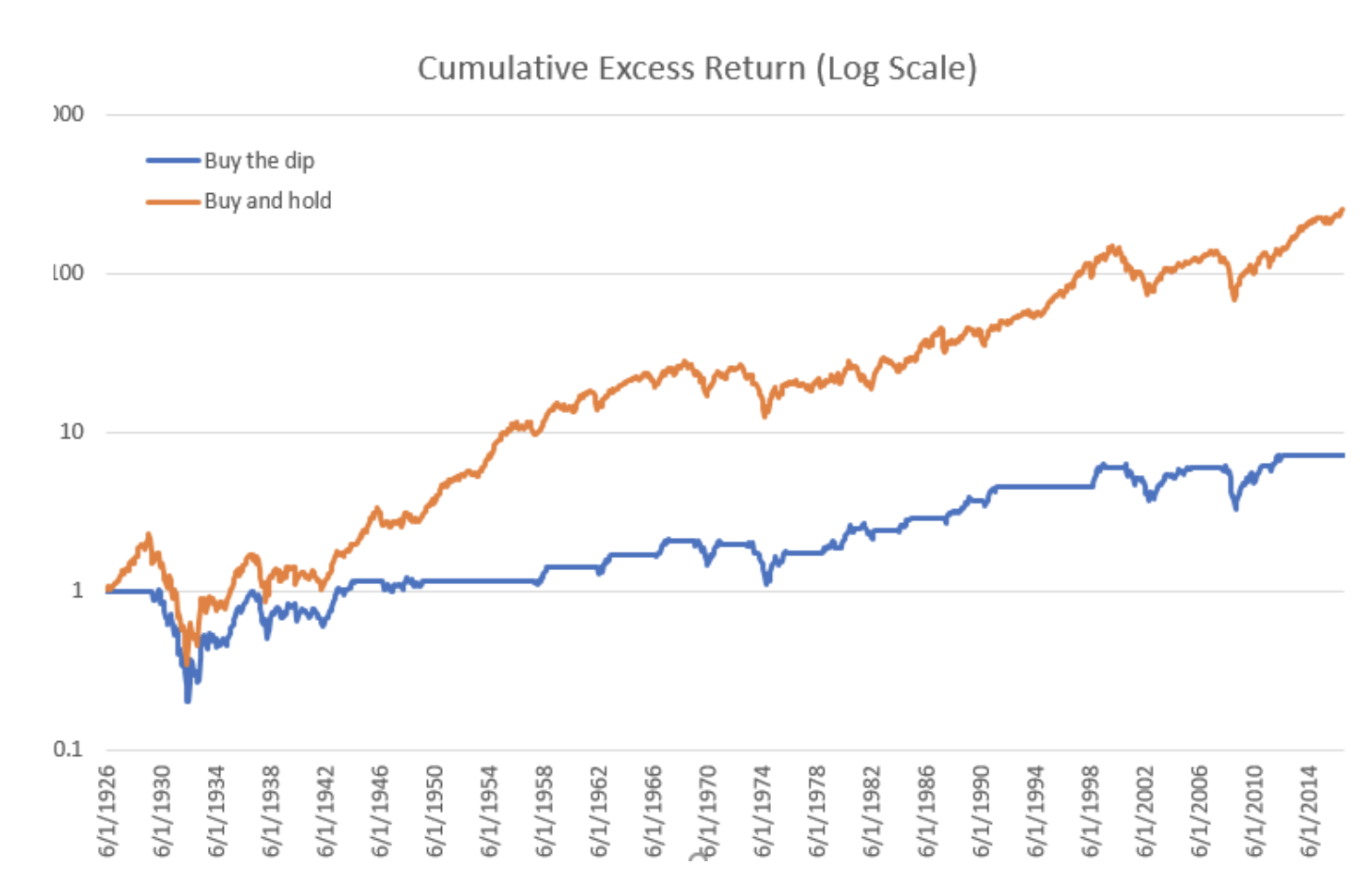 Buy and hold is not the only way to invest. But waiting for the market to crash is no way to invest. It’s exhausting, you won’t actually buy, and it just flat out doesn’t work.