The Robinhood traders are getting smarter.

Ben floated this idea to me a couple of months ago, and I laughed. I’m not laughing anymore.

Last week, the WSJ did a piece about how TikTok and Reddit are the new Wall Street trading desks. One of the most popular stocks on this digital trading desk is Nio, a Chinese electric-vehicle company that you’ve probably never heard of.

This company was, hold onto your jaws, the second-most actively traded stock in the U.S. over the past year!

As you can see in the chart below, as the price made its final ascent, so did the number of tweets a day mentioning it. 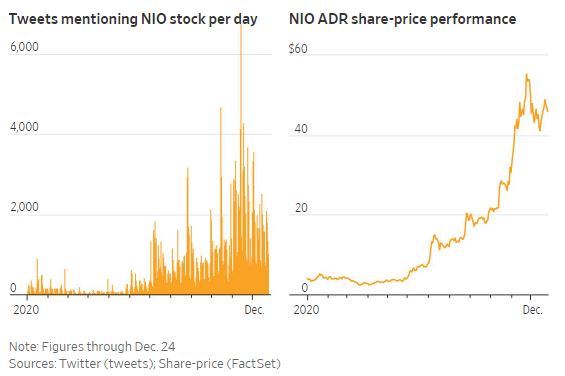 These traders are moving from stock to stock. They squeeze all the juice until there’s nothing left and then move onto the next one. Right now, they’re squeezing the shorts. This chart from Michael Cembalest at J.P. Morgan is something else. 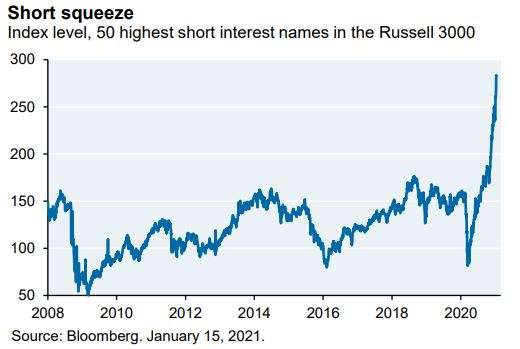 I can’t prove that the digital traders are the culprits, but I don’t think it takes a titanic sized leap of faith to make the connection.

Who are short the most shorted stocks? Hedge funds. Who is squeezing them? @ChadTrades4lyfe. David is bullying Goliath.

As I was coming around to the idea that they really are getting smarter, I had to see this damn viral video that made me reconsider what I had been reconsidering. I’m not a schadenfreuder at heart, but man, this one is tough.

People might see this video and say, “this ends badly,” and believe me I get it, but I don’t think this ends.

Let me be very clear here so that there is no misunderstanding. There is no part of me that thinks these people can make a career day trading stocks, but that doesn’t mean they’re going to stop trying. And if and when they realize they can’t do it, they’ll move on, and a new crop will take their place. Or maybe they never move on because it’s just too much fun. I get that the fun can end, but absent the bursting of a bubble, what wipes them out?

This is a gigantic community now, and if we’ve learned anything over the last decade, it’s that we should be careful shorting networks. There are non-monetary considerations at play here, like belonging. And fun. Did I mention they’re having fun?

Anyway, I don’t think these people can continue to make money forever, but this idea that it ends with them going away is not something I see coming.

They’re now players on the field, for better and for worse.