It feels like the NFT explosion came out of nowhere. Three weeks ago, almost nobody had heard of Solana. Now it’s got a $53 billion market cap. El Salvador just became the first country to adopt Bitcoin as legal tender. Things are happening fast.

Are they, though? The Bitcoin white paper was written 13 years ago. The first NFT was minted in 2014.

The pace at which progress happens often depends on your view of the world. For example, you know when you see a child for the first time in a few years, and your reaction is, “Oh my god. You got so big.” That makes sense because if you saw them at 2 and then not again until they’re 8, that’s a 300% increase. To the parent who is with them every day, however, the changes can be imperceptible.

Dave  Nadig got me thinking about this concept of how fast and slow certain things happen in a new piece about NFTs, saying, “Big, big global change happens much more slowly than technology itself.”

Marc Andreesen wrote about the pace at which innovation occurs in a prescient 2014 article in the New York Times, Why Bitcoin Matters.

A mysterious new technology emerges, seemingly out of nowhere, but actually the result of two decades of intense research and development by nearly anonymous researchers.

Political idealists project visions of liberation and revolution onto it; establishment elites heap contempt and scorn on it.

On the other hand, technologists – nerds – are transfixed by it. They see within it enormous potential and spend their nights and weekends tinkering with it.

Eventually mainstream products, companies and industries emerge to commercialize it; its effects become profound; and later, many people wonder why its powerful promise wasn’t more obvious from the start.

One of the complaints from people not steeped inside the crypto community is that the only use case for these projects is speculating. They don’t actually do anything. It’s understandable why people have this perception when all they see in the headlines are “Somebody just paid $1.3 million for a picture of a rock.”

You personally might never pay for something with Bitcoin, but that doesn’t mean it’s a digital tulip. I want to talk about some ways that blockchain technology might change the world.

Title insurance is a racket. The mortgage lender requires you to purchase a policy if there is an issue with who actually owns your house. The title company searches public records to make sure there is no funny business going on. And every time you refinance, which I have done twice in the last two years, you have to pay for it. One of the benefits of the blockchain is its ability to show proof of ownership. The title insurance industry in the United States is $22 billion.

Global remittances in 2019 were $554 billion. Certain countries rely heavily on this network. In Guatemala, the Philippines, and Senegal, remittances are more than 10% of GDP. In 2017, the average cost of sending $200 across a border was 7%. That’s $39 billion a year taken out of the pockets of people who need every dollar they earn. The average transaction fee for Bitcoin over the last 30 days is $2.60.* That doesn’t take the cost down to 0, but it’s significantly better than what many people are using today. 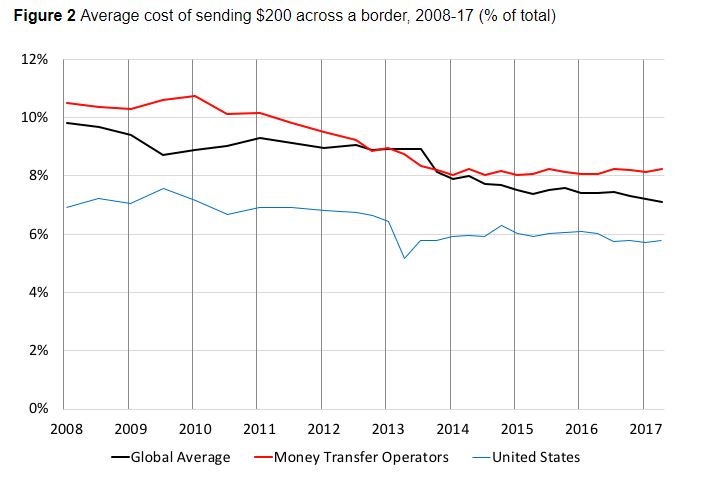 Another area of the financial system that is exposed to far too much leakage is the credit card industry. The amount of fraudulent activity in the network was $28.65 billion in 2019. According to Nilson, “Card-based payment systems worldwide experienced gross fraud losses equal to 6.78¢ for every $100 of total volume in 2019.” This figure does not include expenses incurred from operations, call centers, and investigative activities. Blockchain, unlike many of these issuers, has no single point of weakness. A blockchain is virtually unhackable.

Adoption will vary, but I can see a world where we pay for things with digital wallets without being exposed to 26% APRs from credit card companies. Here’s Andreesen describing how Bitcoin can help reduce fraud:

For example, with Bitcoin, the huge hack that recently stole 70 million consumers’ credit card information from the Target department store chain would not have been possible. Here’s how that would work:

You fill your cart and go to the checkout station like you do now. But instead of handing over your credit card to pay, you pull out your smartphone and take a snapshot of a QR code displayed by the cash register. The QR code contains all the information required for you to send Bitcoin to Target, including the amount. You click “Confirm” on your phone and the transaction is done (including converting dollars from your account into Bitcoin, if you did not own any Bitcoin).

Target is happy because it has the money in the form of Bitcoin, which it can immediately turn into dollars if it wants, and it paid no or very low payment processing fees; you are happy because there is no way for hackers to steal any of your personal information; and organized crime is unhappy. (Well, maybe criminals are still happy: They can try to steal money directly from poorly-secured merchant computer systems. But even if they succeed, consumers bear no risk of loss, fraud or identity theft.)

One more area where blockchain can improve the current system is ticket sales. Has anybody had a good experience with StubHub? How much does it cost to sell tickets on this platform? Judging by the website, you wouldn’t know. Here’s what it says. This is actually infuriating.

It’s free to list tickets on StubHub! When they sell, we collect a sell fee. This may change over time depending on ticket supply and ticket marketing costs.

StubHub’s fees help us create a safe, global ticket marketplace. As long as you deliver your tickets as promised and on time, this is the only StubHub fee you’ll ever pay.

Umm. What? Okay, so what does it really cost to transact on the site? According to this, a lot.

Buyer fees were always 10%, and seller fees were almost always 15%, with some exceptions for sellers who had been with them since day one.

At the start of 2014, however, StubHub started playing games with their fees. When StubHub transitioned to showing all-in pricing, they used the opportunity to experiment with charging buyers anywhere from 2% to 20% (on top of the 15% for sellers). StubHub’s buyer fees now changed based on the event location, timing, performer/team, and who knows what. The only time someone would know what buyer fees StubHub was charging was to list a ticket for an event, and then go look at the price at which StubHub was listing it. There was absolutely zero transparency.

The only relationship most people have with crypto is the wild headlines they see. It’s hard to separate the fact that yes, speculation is a massive part of the ecosystem with yes, real people are building real-world solutions.

I hope this opens your mind to what’s happening, considering the source. I’m not a crypto expert. I don’t have laser eyes in my profile. I don’t think money printing has a linear relationship with inflation. I actually think our current financial system works pretty well. The solutions I mentioned are only the tip of the iceberg.

Some of the smartest investors are pouring tons of money into this space. Venture-capital funding in blockchain startups hit $2.6 billion in the first quarter. You can ignore this if you want, but it’s happening. And one day, you’re going to wake up and think it happened in the blink of an eye.

Crypto doesn’t have to take over the world for us to feel its impact. It might not replace the current financial system, but I am very confident it will have a much larger piece of the pie in ten years than it does today.

*There are times when the fee for sending Bitcoin has spiked. They’ve been short-lived, but they’ve happened.