Doing nothing has been one of the best strategies of the last few decades.

I’m talking about the tried and true 60/40 portfolio. 60% stocks. 40% bonds. You had to rebalance, so not exactly nothing, but as close to it as you can get.

Nothing and easy, however, aren’t the same thing. You had to sit through multiple 50% crashes in the stock market. You had to sit on your hands during periods where “everyone” was getting rich. On the spectrum of easy to impossible, doing “nothing” is closer to the latter.

How many people can stay the course for multiple decades? The investor’s principal challenge is to fight the urge to de-risk in a bear market and add risk in a bull market. Most will lose this battle at some point. Some will lose the war.

Historically, the best, again not easiest, but best weapon to fight off these feelings was diversification. I use the word historically because nobody knows what the future holds. Given that 40% of the portfolio is now yielding under 2%, it’s unlikely that the past returns will be matched in the future. 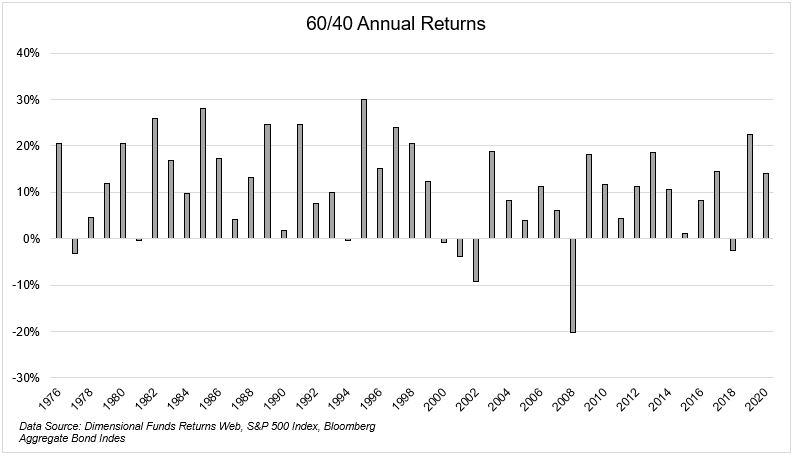 The nightmare scenario for this strategy is that rising rates will bring stocks back down to earth. Low interest rates encourage investors to use their imaginations. But when money has a price, equations start to matter. And, needless to say, rising interest rates are also bad for bonds. So yeah, rising rates would be bad for bonds and probably for stocks too. But the question is, for how long?

If money leaves stocks and money leaves bonds, where does it go? It has to go somewhere, and one of the two largest asset classes in the world is usually the place where money finds a home. The brilliant Nick Maggiulli ran some numbers for me to quantify how often stocks and bonds are both down over a given period of time.

Long periods of negative stock and bond returns are rare. Of the 1,137 rolling 12 month periods since 1926, stocks and bonds were both negative on 16 occasions or 1.4% of the time.

Now the huge caveat here is that interest rates have never been this low for this long. So while I can’t rule out the nightmare scenario, I also don’t believe the 60/40 portfolio is dead. Long live the king.

I spoke about this and much more on this week’s Compound and Friends with Blair, Eddy, and Josh.