This market is savage. The index finally cracked, but many individual names are splattered on the cement. The last time stocks gave up intraday gains like this was during the dotcom bubble.

Here’s an extreme example of the carnage. In early November, Peloton was down 50% from the highs before reporting earnings. It fell 35% that day after a dumpster fire of a report. Dip buyers might have thought they were getting the deal of a lifetime, buying a brand-name company down 70% from its highs. Wrong. Over the next 50 days, the stock has gotten cut in half again. This is not an isolated incident. We have stocks out there that are an absolute nightmare.

The wreckage got me thinking about the psychology of investing and how difficult all of this is for people buried in these names. The market has an amazing ability to turn our internal dial from overconfident to paralyzed by fear.

You know the quote about the market being an expensive place to find out who you are? You’ve probably heard it before, but you might not know where it comes from. It’s from my favorite financial book ever, The Money Game, by “Adam Smith,” whose real name was George Goodman. Here it is:

It sounds simplistic to say the first thing you have to know is yourself, and of course you are not necessarily out to become a professional money manager. But if you stop to think about it, here is one authority saying there are not formulas which can be automatically applied. If you are not automatically applying a mechanical formula, then you are operating in this area of intuition, and if you are going to operate with intruition- or judgement- then it follows that the first thing you have to know is yourself. You are- face it- a bunch of emotions, prejudices, and twitches, and this is all very well as long as you know it. Successful speculators do not necessarily have a complete portrait of themselves,warts and all, in their own minds, but they do have the ability to stop abruptly when their own intuition and what is happening out there are suddenly out of kilter. A couple of markets crop up and they sa. simply, “This is not my kind or market,” or “I don’t know what the hell’s going on, do you?” and return to established lines of defense. A series of market decisions does add up, believe it or not, to a kind of personality portrait. It is, in one small way, a method of finding out who you are, but ir can be very expensive. That is one of the cryptogram which are my own, and this is the first irregular ruel: If you don’t know who you are, this is an expensive place to find out.

One group of investors who are dealing with this self-examination right now are Netflix shareholders. The business has been on an incredible run over the past few years. Squid Game was the biggest show in 2021. Red Notice and Don’t Look Up were the two biggest movie releases Netflix has ever done. The company was the most Emmy-winning and nominated TV network last year. The same can be said of the Oscars.

Despite a large user base, they’re still adding tons of subscribers. 8.3 million in the most recent quarter. They’re not adding as many global subscribers as they have in the past, but the business is still doing great. 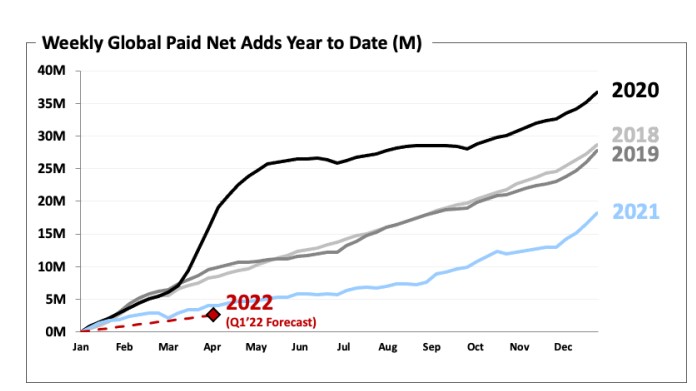 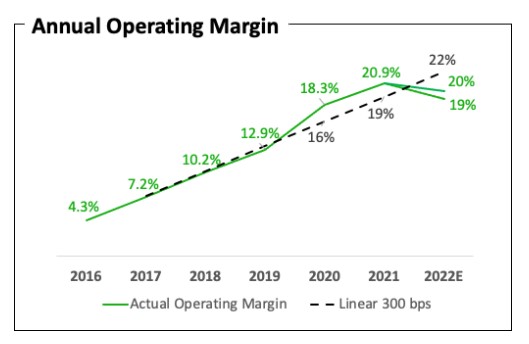 And yet the market beat the hell out of the stock today. It fell 21% to the lowest levels since the summer of 2018. 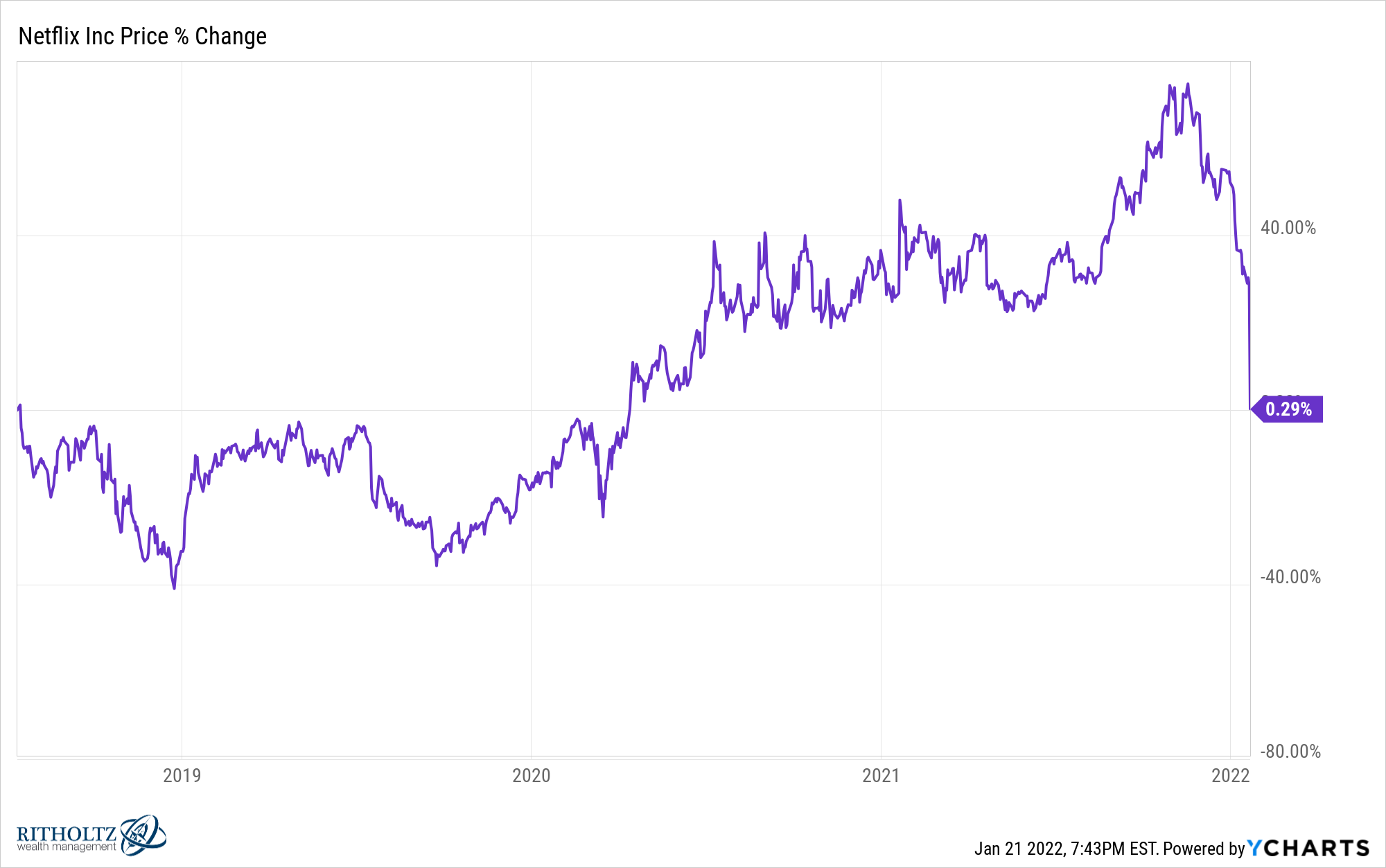 I thought it would be interesting to look at where the business was then versus where it is now, given that the stock is in the same place.

70% more subscribers. Twice as much revenue. More than five times as much income. Same market cap.

This one’s hard to wrap my head around. Think about all the amazing content Netflix had produced over the years. Squid Game, The Queen’s Gambit Bridgerton, Cobra Kai, Tiger King, Ozark, Emily in Paris, The Witcher, The Crown, Narcos, You, The Irishman. So much for the viewer and so little for the shareholders. Why?

Because investors don’t care about what you’ve done, they care about what they think you’re going to do. By 2018, investors had pulled forward all of the growth. They did this by assigning too high multiple to its underlying fundamentals. And today, like all growth stocks, Netflix is being rerated.

In 2018, the business was trading at 14.6x sales. Right now it’s 6.3x. Yes, the business is generating a lot more revenue and earnings today than it was then, but investors aren’t willing to pay the same price. 276x earnings in 2018. 36x today. 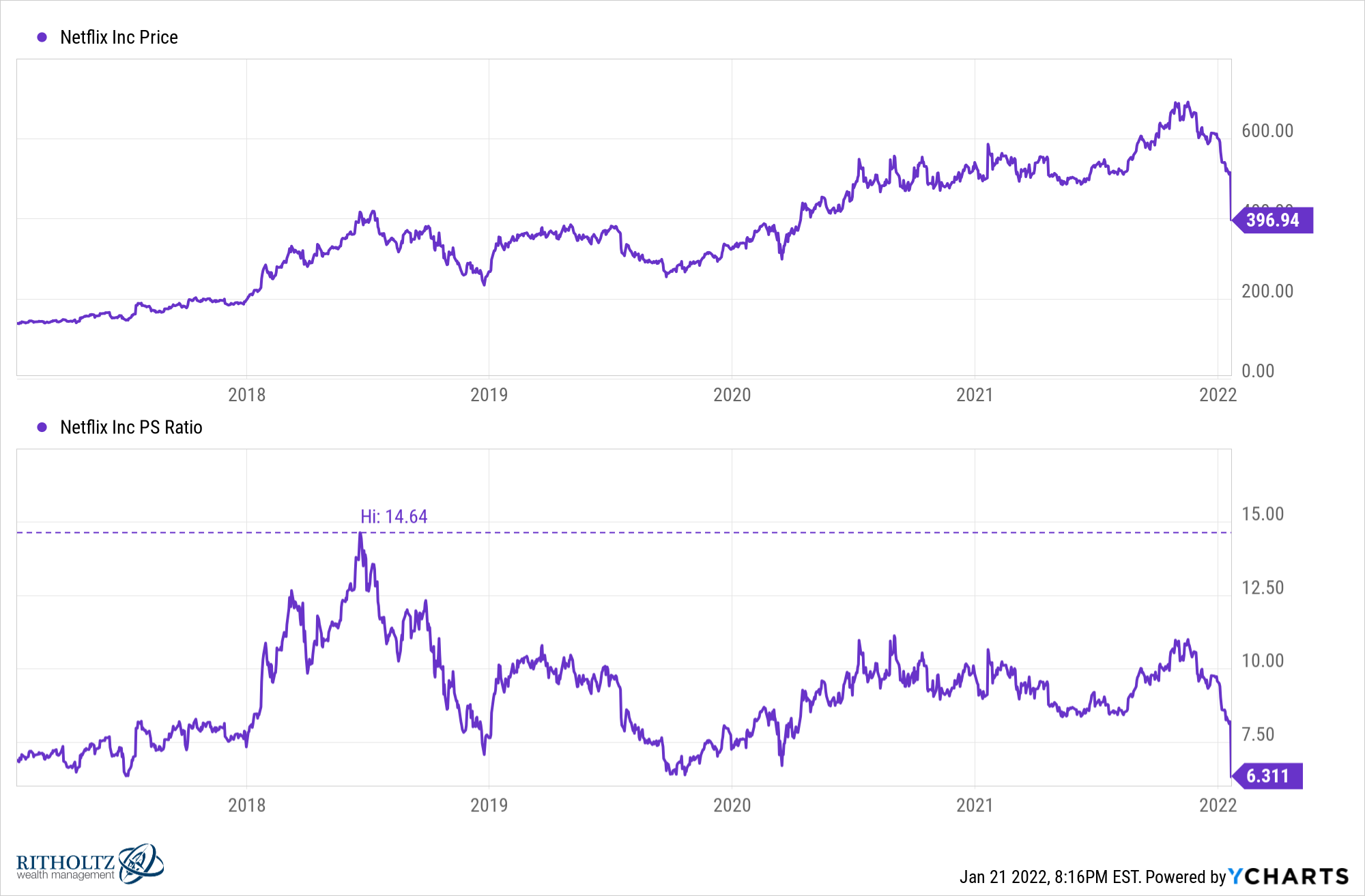 This story is playing out all over the place. Shopify was at an all-time high in November. In 43 sessions, it lost 48% of its value. Scrolling through these charts is otherworldly. 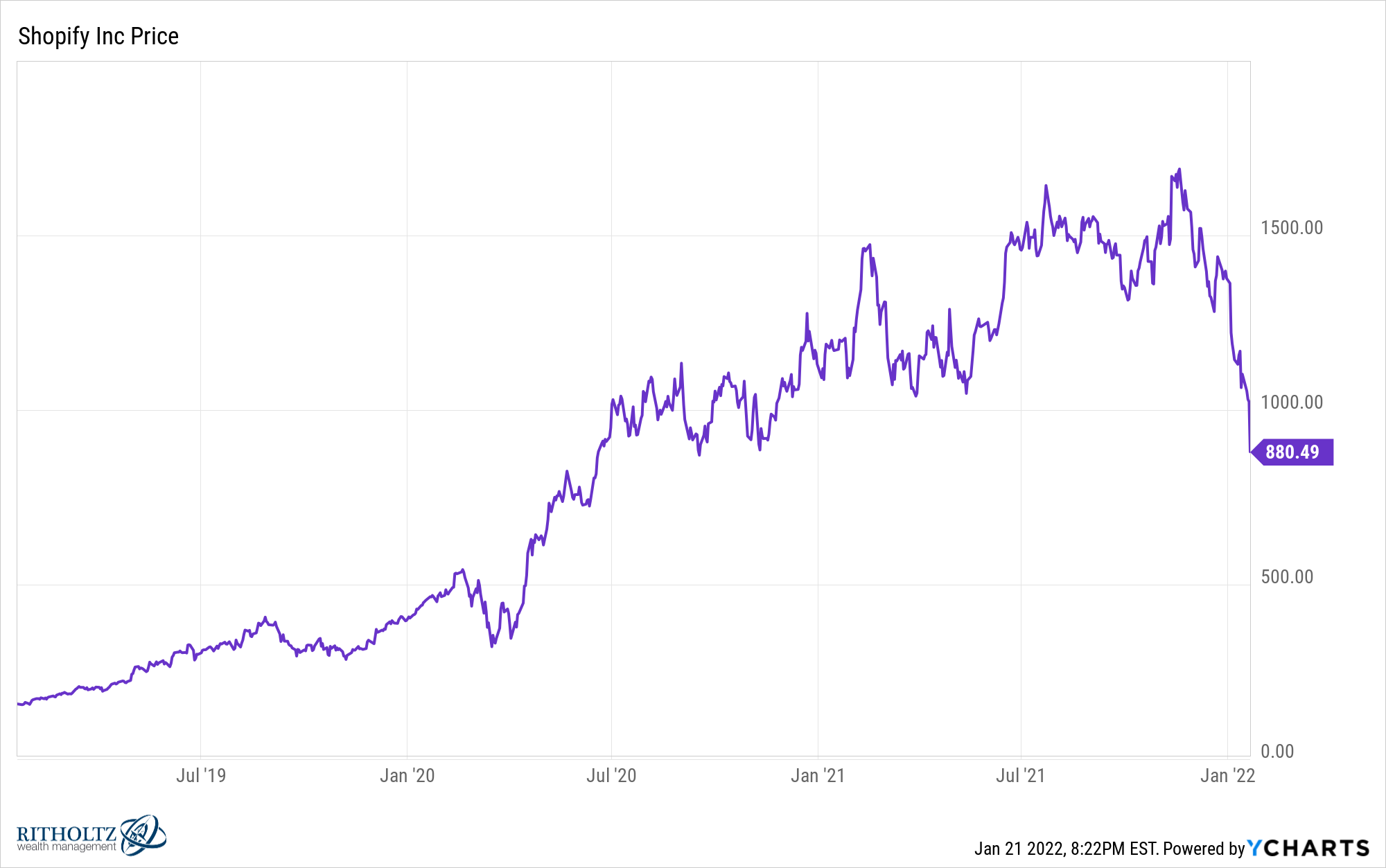 Shopify is a quality business that is growing like crazy. They recently crossed the $1 billion quarterly revenue mark, up 5x since 2018. They’ve done more than $4 billion in revenue over the past twelve months. The problem is, even after this 48% decline, the market cap is still $110 billion, or 27x sales.

I’m not predicting it, but another 50% move lower from here wouldn’t be shocking. These names overshot on the upside, they can do the same on the downside. I’m not saying this to scare anyone, but if that thought terrifies you, it’s okay to lighten up.

I’ve been keeping an eye on this chart, and it looks like we could have a flippening very soon. If the ARKK names don’t stabilize, they’ll trade at a discount to the Nasdaq 100, based on price-to-sales. 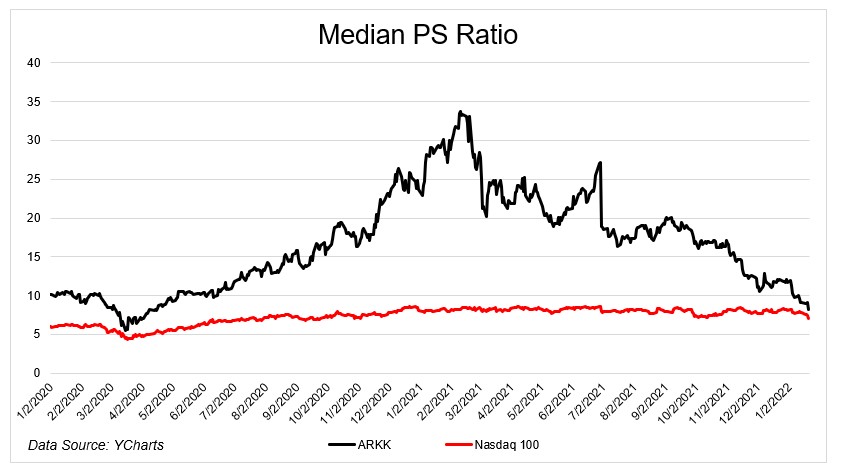 All of this is taking a toll on investors’ psyche. How could it not?

Ignore all the predictions about where sentiment is, where prices might bottom, and where we go from here. The truth is that we’ll only know we’re at the bottom when prices stop going down and start going up. Clearly, we’re not there yet.