Like most people, I’m fearful when others are fearful. I’ll be the first to admit that ten days ago I was pretty nervous about the stock market. Still am.

Did I think we would get a bounce? Yes. On March 12th I wrote about how nobody was bullish, myself included. Allow me to quote…myself. I said, “A lack of bulls doesn’t promise anything, but good things usually happen when nobody thinks they can.”

Okay, so good things have happened since I wrote that, but the level of good went well beyond what I was thinking. Since March 14th, we’re on a run that’s as good as anything we’ve seen over the last decade, minus the bounce from the March 2020 lows. 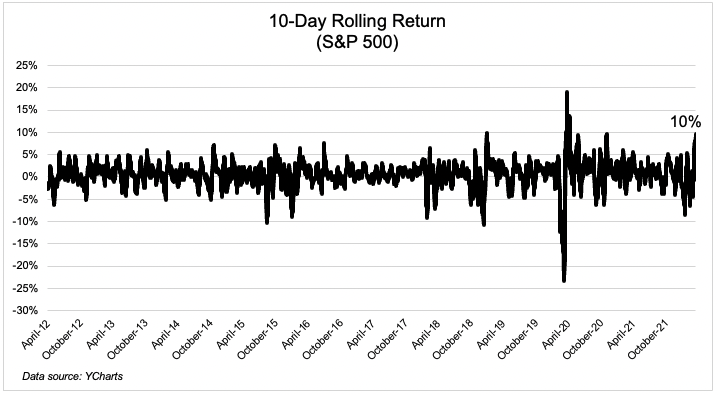 ARKK is up 34% from the lows in just ten trading sessions. FANMAG has added a trillion dollars in market cap over the last ten days.

It’s tough to explain this one, given the headwinds we still face. Between rising rates, inflation, war, a potential policy error, and the commodity spike, it feels like stocks have every reason to selloff. And they’re just not, which definitely has my attention. So what’s going on? Are people pricing in rate cuts before we even get rate hikes? Was this just a violent bounce due to flows and positioning being offsides? Was this the market sniffing out peace talks?

Josh and I are going to try and get to the bottom of this on tonight’s What Are Your Thoughts?