There are three types of investors during every bear market.

The first investor is always looking for signs of a bottom. They’ll say things like “They’re throwing the baby out with the bath water.” Or “Look how much we’re down!! There are no more sellers.” For this first group, hope springs eternal.

The second group always thinks we’re going lower and is convinced that every rally is of the bear market variety. They’re looking for capitulation, always. Stocks can be in a 30% drawdown and then fall 5% in a day when 95% of the volume is to the downside, and they’ll be like “This is orderly. Need to see real fear.”  Lol. Okay.

Then the third group goes back and forth between the two. Hopeful on up days and despondent on down days.

All three groups are looking for clues as to where the market goes next and I think we just got a pretty decent hint.*

This is the most overwhelming display of selling in history.

The most overwhelming display of selling in history. Wow. Turns out that people are fearful when others are fearful, even “the smart money”.

According to Bloomberg, “Hedge funds tracked by Goldman Sachs Group Inc. offloaded US equities for a seventh straight day Monday, with the dollar amount of selling over the last two sessions exploding to levels not seen since the firm’s prime broker began tracking the data in April 2008.”

Yesterday, nearly 40% of stocks in the S&P 500 closed at a 52-week low, which is one of the highest readings we’ve seen in my lifetime. 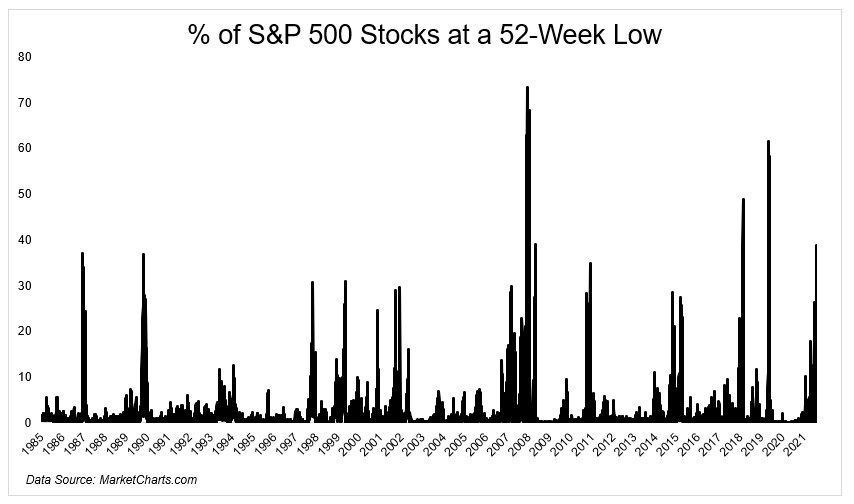 Washouts to this degree have coincided with bottoms, sort of. Here’s why I asterisk that statement. We don’t know that the black line is peaking until after the fact. Also, max pessimism doesn’t have to coincide with a bottom in stocks, as I discussed earlier this week. The max point in the % of stocks at 52-week lows was in November 2008. As you know, stocks didn’t bottom until March 2009. In between those two dates, the index fell another 26%. 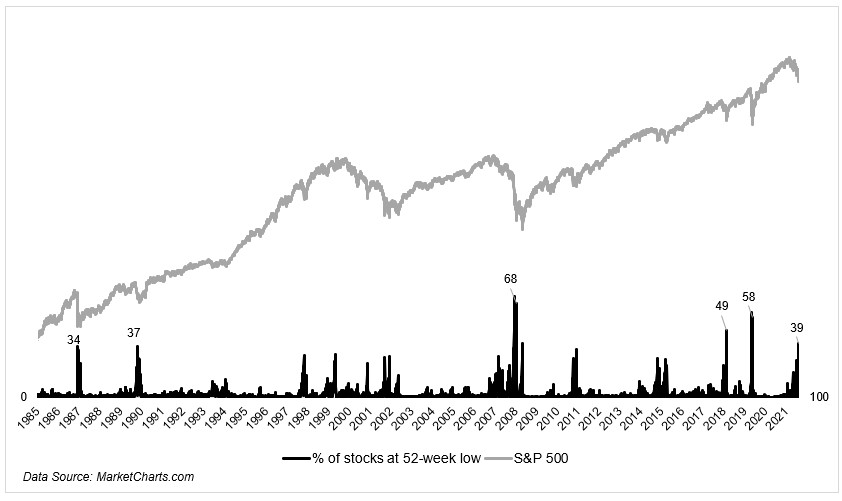 Panic selling is a good thing when you’re looking for a bottom, but as I just mentioned, that doesn’t mean it’s imminent.

We spoke about this and a lot more on this week’s TCAF with Eric Jackson.