The idea that you should buy what you know goes something like this- “I cannot believe how much money I spend at Costco. Hey wait a minute, why don’t I buy some stock in this company?”

This line of thinking was made famous by Peter Lynch, the former head of Fidelity’s Magellan Fund. Lynch, however, said this concept was taken out of context and oversimplified. He told the Wall Street Journal, “I’ve never said, If you go to a mall, see a Starbucks and say it’s good coffee, you should call Fidelity brokerage and buy the stock.”

“What you know” can be a great place to start, but that shouldn’t replace actual analysis. “If you can’t understand the balance sheet, Lynch said, “you probably shouldn’t own it.”

You might love your GoPro camera or your Ford Explorer, but that doesn’t mean other people share your opinion. And if everyone does share your opinion, that can actually make for a risky investment. Focusing on the fundamentals and ignoring the expectations falls under the category of what Michael Mauboussin has called the single greatest error:

The single greatest error I have observed among investment professionals is the failure to distinguish between knowledge of a company’s fundamentals and the expectations implied by the company’s stock price.

What makes stock picking such a difficult endeavor is that identifying a good product or even a great business is only one side of the equation.

Even if we had the facts ahead of time, we wouldn’t necessarily know how the market would respond. Consider some data points from Destined For War by Graham Allison

Imagine you had this information 10 years ago. How much money would you put into this country’s stock market? I understand a country and a business are not apples-to-apples, but these numbers would have likely made you bullish on the companies* that were responsible for driving this explosive growth.

So how much better did China’s stock market do versus ours? The S&P 500 outperformed the Chinese market by 100% over the last ten years. Okay, honestly I was expecting the spread between our market and China’s to be even greater, but I wrote most of this post before I got the data and I’m not about to turn back now. The point is, you can have the data and still not have the answers.

The chart below is one that I’ve used in the past to show the weak link between GDP growth and stock market returns. There are likely a number of explanations for this but the simplest one is that investors over extrapolate high growth countries the same way they do with high growth stocks. Dangerous things happen when reality falls short of expectations. 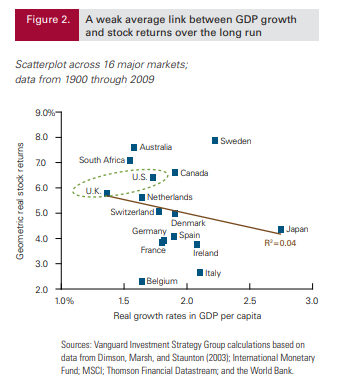 What makes security selection such a difficult endeavor is that it is not enough to identify a good product or a good business or a country whose economy is growing quicker than the rest of the world. This challenge is best explained by John Maynard Keynes who once compared stock picking to judging a beauty contest. “It is not a case of choosing those which, to the best of one’s judgment , are really the prettiest.” Rather, you must anticipate “what average opinion expects the average opinion to be.”

*I get all the state owned enterprises and regulations that make the Chinese stock market repressive. Freedom deserves a premium, which is a point that my friend Perth Tolle has made numerous times.