On our first episode of Re-Kindled, Ben and I take a look back at The Big Short, which Ben calls the best book ever written on finance. 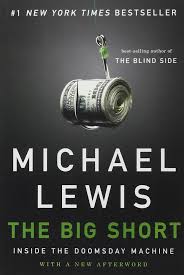 Quotes from the book

“Six months after Liar’s Poker was published, I was knee-deep in letters from students at Ohio State University who wanted to know if I had any other secrets to share about Wall Street. They’d read my book as a how-to-manual.”

“The CDO was, in effect, a credit laundering service for residents of lower middle class america. For Wall Street it was a machine that turned lead into gold.”

“The bookies were offering you odds of somewhere between 6:1 and 10:1 when the odds of it working out felt more like 2:1. Anyone in the business of making smart bets couldn’t not do it.”

“Some of Lippmann’s former converts suspected that the subprime mortgage bond market was rigged by Wall Street to insure that credit default swaps would never pay off.”

“Steve’s fun to take to any Wall Street meeting…Because he’ll say ‘explain that to me thirty different times. Or ‘could you explain that more, in English? Because once you do that, there’s a few things you learn. For a start, you figure out if they even know what they’re talking about. And a lot of times they don’t.”

“What you want to watch are the lenders, not the borrowers,” he said. “The borrowers will always be willing to take a great deal for themselves. It’s up to the lenders to show restraint, and when they lose it, watch out.”

“I hated discussing ideas with investors,” he said, “because I then become a Defender of the Idea, and that influences your thought process.” Once you become an idea’s defender you had a harder time changing your mind about it.”

“What if CDSs are fraud? I am asking myself that question all the time, and never have I felt like I should be thinking that way more than now. No way we should be down 5% this year just in mortgage CDSs.”

“One day he got me on the phone and was pissed of about a trade that had lost money,” says a Connecticut trader. “He said, “When you lose money, it’s my fucking money. Say it. I said, ‘What?’

“I called Goldman Sachs to ask them about Paulson,” said one rich man whom Paulson had solicited funds for in mid-2006. “They told me he was a third-rate hedge fund guy who didn’t know what he was talking about.”

“It was the first time in two years that Goldman Sachs had not moved the trade against him at the end of the month. “That was the first time they moved our marks accurately,” he notes, “because they were getting in on the trade themselves.” The market was finally accepting the diagnosis of its own disorder.”