Something incredible happened today. The combined market cap of Square, Spotify, Tesla, Zoom, and Shopify just surpassed that of Berkshire Hathaway. What does one have to do with the other? Nothing, but if these aren’t a sign of the times, I don’t know what is.

I know most people don’t want to hear this, but one of these numbers doesn’t have to be wrong. Berkshire can be priced appropriately here. So can these five growth stocks. That’s not a hill I want to die on, but it’s probably more likely than you or I believe.

Speaking of Tesla, it just became the largest auto maker in the world ¯\_(ツ)_/¯ 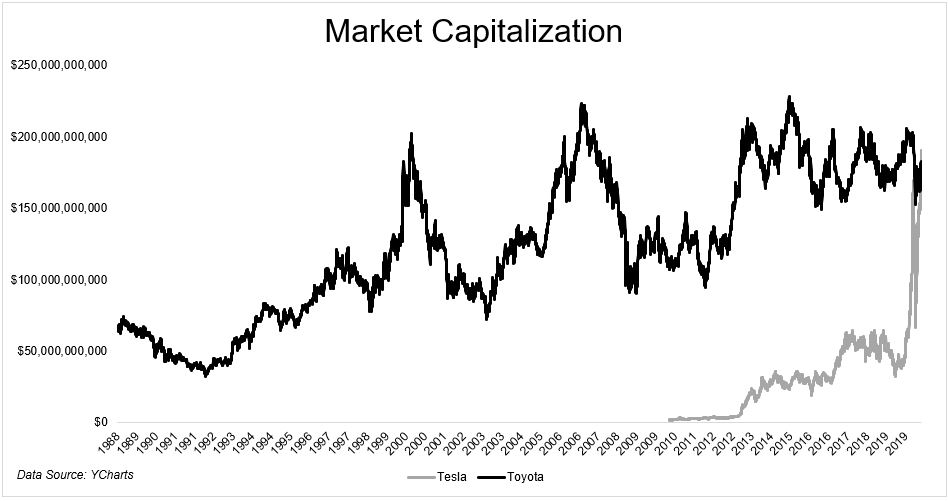 Looking at market cap alone is not a smart way to determine whether or not a company is fairly valued. Even when you compare the size of a business to its underlying fundamentals, you’re still not seeing the full picture. This only tells you what happened, not what’s going to happen.

Granted I’m cherry picking two of the most successful companies in the history of capitalism, but that’s not important right now.

Like many of you, I look at these numbers and marvel. Some of these stocks look like they’re discounting more growth than they can possibly deliver, but if we’ve learned anything over the past few years, it’s that betting against stocks that are going up is a game that most of us should just watch and not play.