We’re going back to normal, but things will never be the same. This is true in life and in the market.

One of the biggest stories of 2020 was the rise of retail investors. Between the quarantine, zero commissions, $1,200 checks, and Dave Portnoy, it was the perfect storm for trading.

The amount of people trading stocks has gotten so large that they now make up ~25% of overall volume, nearly as much as hedge funds and mutual funds combined! 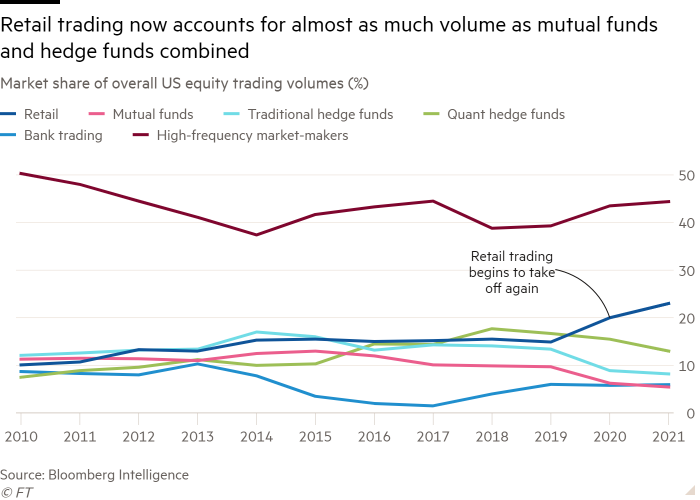 There are differing opinions about how much this crowd influences the market, which is why I was happy to read a paper that attempted to quantify it. In The Equity Market Implications of the Retail Investment Boom, the authors found that retail  significantly impacted markets:

The demand of Robinhood traders accounts for 7 % of the cross-sectional variation in returns observed during the recovery in Q2. Considering the fact, that they hold roughly 0.2% of the aggregate US market capitalization, their contribution is enormous

I wish I could fact-check them, but I’ll have to take their word for it with equations like this.

They also go on to state that:

Withdrawing the (approximated) $65 billion in Robinhood’s assets under management from the US equity market would have lowered the aggregate market capitalization in July by roughly $355 billion.

If true, this is an incredible finding. Just $65 billion in assets raised the aggregate market capitalization of U.S. stocks by ~1%. And this is only for Robinhood, which says nothing of the billions of retail dollars at Schwab and other brokers.

Like all good parties, however, this one is coming to an end. The Wall Street Journal reported:

On March 26, individual investors purchased about $772 million of U.S. equities on a net basis, a 60% decline from the almost $2 billion reached in just one day on Jan. 29, at the height of the meme stock craze.

You don’t need to be Sherlock Holmes to figure out what’s going on here. Many retail favorites have gotten hit pretty hard over the past few weeks, and as a result, new money stopped piling in. Considering that warm weather and an economic reopening are right around the corner, I would expect this number to come down further.

I don’t know where this chart eventually settles, but it’s still double what it was pre-pandemic even after the recent decline. 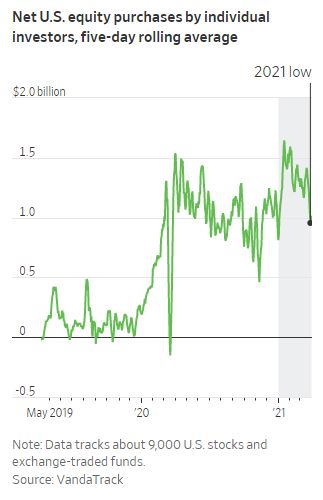 So maybe the party isn’t ending after all, but it’s no longer an open bar.

Things are getting close to returning to normal, but markets will never be the same.