Where are we in the cycle? It’s a hard question to answer. Inflation is high but interest rates are low. The stock market is getting crushed but the economy is okay. When you put everything together, some pieces of the puzzle seem very out of place.

Ben and I went on Derek Thompson’s Plain English podcast to discuss all of this.

I’ll give you the bad news first. It’s over.

Over the last decade, the defining feature in financial markets has been easy money. Investors were willing to subsidize money-losing companies as long as they grew their top line and expanded their user base. It started with venture capitalists and continued as these companies entered the public markets.

In Uber’s first earnings report, the ride-hailing app revealed that it lost more than $1 billion during the quarter. It’s shown ten losses in the twelve earnings reports since. That’s not going to fly anymore, and Uber’s CEO knows it. In an email to employees, he said:

In times of uncertainty, investors look for safety. They recognize that we are the scaled leader in our categories, but they don’t know how much that’s worth. Channeling Jerry Maguire, we need to show them the money. We have made a ton of progress in terms of profitability, setting a target for $5 billion in Adjusted EBITDA in 2024, but the goalposts have changed. Now it’s about free cash flow. We can (and should) get there fast.

Inflation and what the federal reserve might do to get it under control are causing chaos in financial markets.

There was a school of thought, which I was in, that inflation was being driven by factors that were related to a reopening of the economy that was harder than anticipated. That’s clearly wrong, as inflation is lasting longer and spreading to services and other areas unrelated to supply chain disruption. 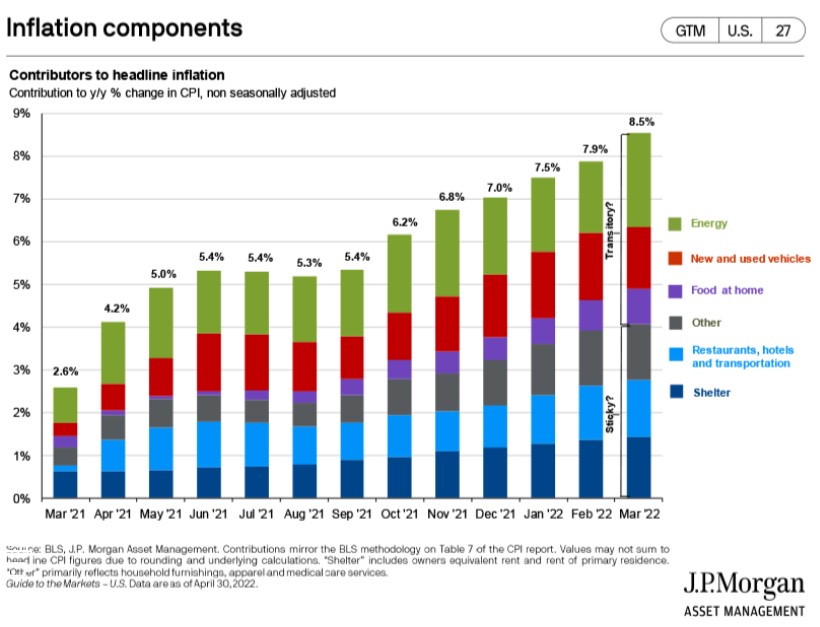 And so the fed has to get more aggressive in cooling off demand, even if they can’t do anything about the supply side. And this is what I mean when I say it’s over; not that the market will never come back, but it’s not going to have the wind of easy money at its back anymore.

Which is one of the reasons that we’re currently living through our dotcom bust. Investors are quickly adjusting to a world that looks very different than the one we’d been living in. 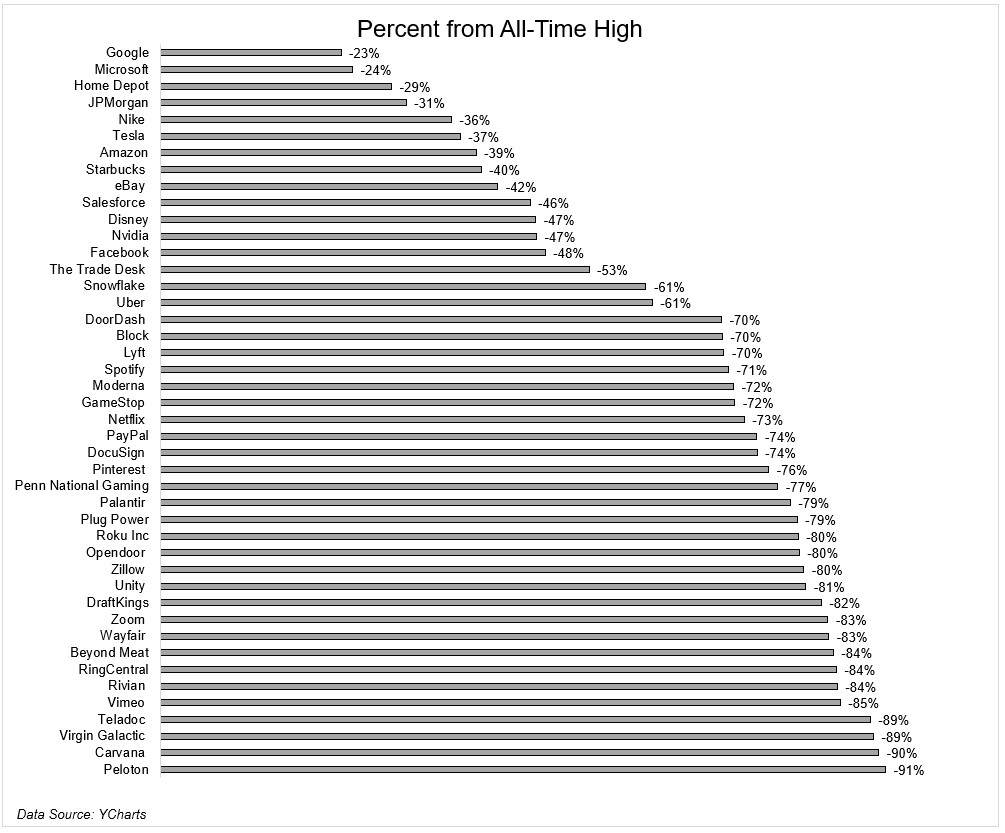 I told Derek one of the things that worries me is we haven’t even seen inflation slow down spending. Sam Ro tweeted this chart that shows at an annual rate, consumers are spending ~9% more than they were pre-covid. Now you can say that’s because prices are rising, which they obviously are, but we still haven’t seen consumers pull back just yet. 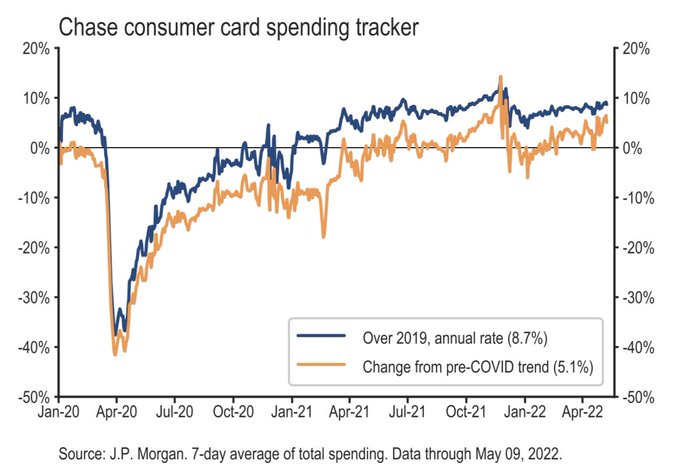 And now, for some good news. If we do tip into a recession, the consumer has never been better prepared for it. 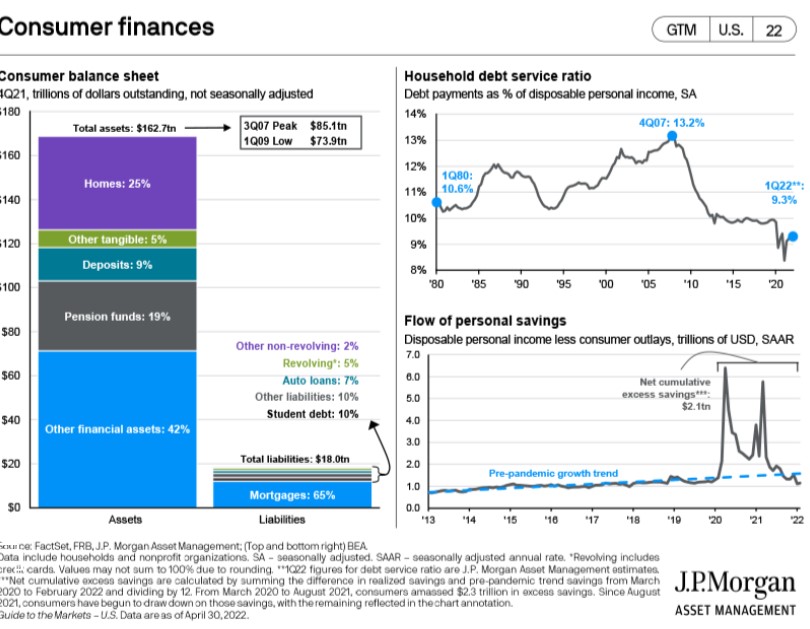 Corporations are also in terrific shape. This can change in a hurry, but right now default rates for high yield bonds are at all-time lows. 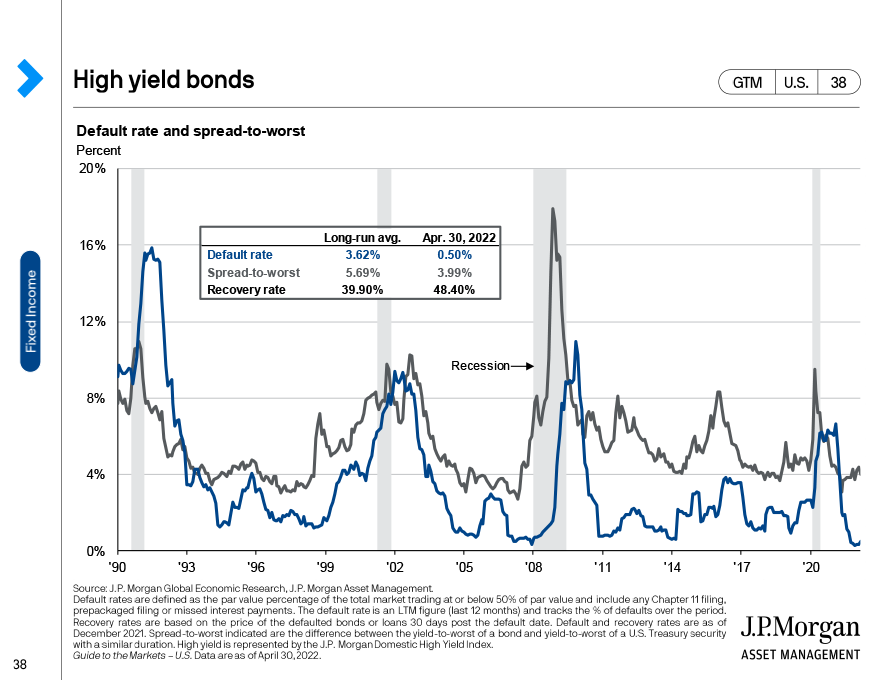 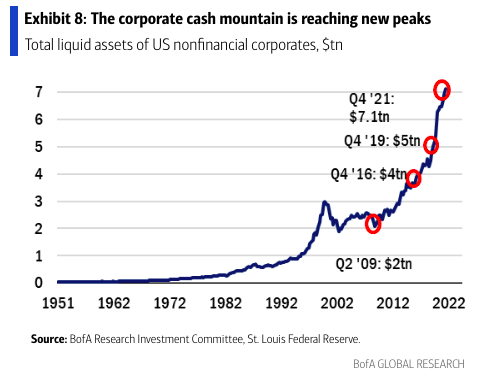 Or as little debt relative to earnings. 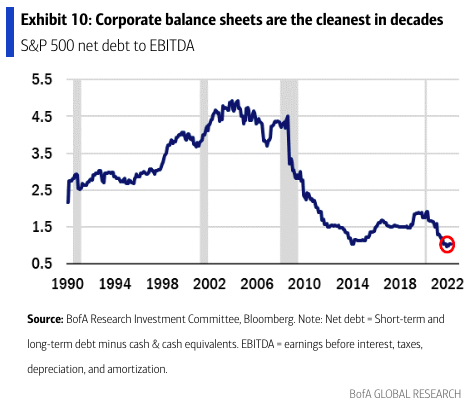 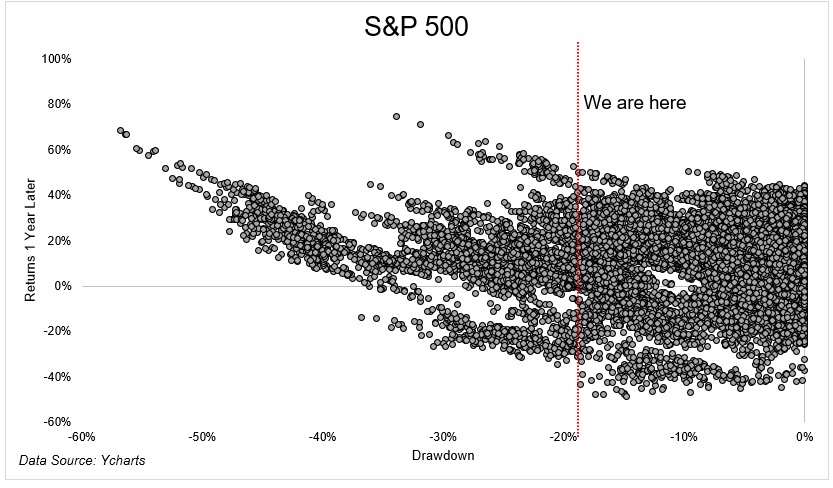 When you combine this with the fact that everyone is bearish, myself included, you can tell yourself a nice story about how all of the worries are already in the market. 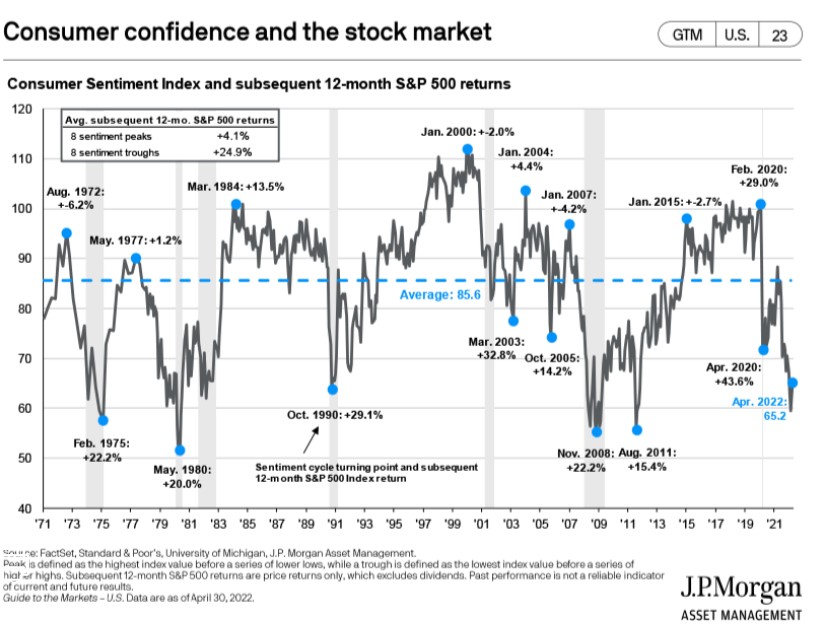 That’s how Bill Miller chooses to look at the world. He said

When I am asked what I worry about in the market, the answer usually is “nothing”, because everyone else in the market seems to spend an inordinate amount of time worrying, and so all of the relevant worries seem to be covered. My worries won’t have any impact except to detract from something much more useful, which is trying to make good long-term investment decisions.

“The market seems to spend an inordinate amount of time worrying” is spot on. Jason Goepfert shared that last week, 8,200 articles were written about bear markets.
So, where are we in the cycle? I think that things will ultimately get better, but that first they’re going to get worse.
So if I think things will worsen, why don’t I sell all of my stocks? Because I’ve been doing this long enough to not trust my intuition, and more importantly, because long-term success isn’t about getting things right in the short term.
I’m a buy and hold guy, and that only works if you hold in up markets and in down markets. Easier said than done, I know, but it’s 1,000x more doable than selling stocks at the top and buying at the bottom and doing that over and over again. That, my friends, is a fairy tale. So, despite my worries, I choose to hang on. I prefer to just keep buying.
Josh and I are going to cover this and much more on tonight’s What Are Your Thoughts?