What I’m about to write is going to sound incredibly stupid. Some of it also might not be factually accurate, as I’m still very much a NoobWhale.  If you want to learn more, I suggest you start here, here, or here. Also, this is definitely 100% not investment advice. Terms and conditions, etc.

I’m participating in the early days of a mania for the first time in my life. I tend to be a knee-jerk skeptic, so I feel like a fish out of water right now. I never bought Bitcoin in its infancy, and I don’t do meme stocks. It’s just not in my personality. Maybe it’s because my parents got divorced when I was young, and I JUST DON’T WANT TO GET HURT AGAIN, OKAY!

All jokes aside, this thing got its tentacles in me, and it’s not letting go.

This thing I’m referring to is something called non-fungible tokens, which you’ve definitely seen pop up over the last week if you spend any time on the internet. And if you’re like most people, you’re probably wondering what the hell is this?!?

Non-fungible tokens are digital assets that can provide ownership of a piece of art, digital real estate (not kidding), and sports cards, which I’ve been dabbling in lately.

NFTs are indivisible, unlike shares of stock or other cryptocurrencies. You own all of it, or you own none of it. They’re also verifiable, meaning you can see the history of where it started, who has owned it, and how much subsequent owners have paid for it.

I don’t remember where I first heard about NBA Top Shot, but I definitely thought it was a goof. My immediate reaction and everybody’s reaction when they first hear about it goes something like this: “Wait, I don’t get it. These are…GIFs…on the blockchain? Why can’t I just watch it on YouTube? Why would somebody pay money for a GIF? What am I missing?”

You’re not missing anything. That’s exactly what this is—ownership of a Zion Williamson dunk or a Ben Simmons Assist, or a LeBron James 3-pointer.

The genius of Top Shot is that they actually partnered with the NBA on this project. I don’t know the terms of the deal, but it’s cool that the league is involved.

I know you probably have a million questions, so let me explain how this works, and then I’ll share my experience. Before I begin, let me just say that this thing is absolutely blowing up. Today alone, there have been almost 150,000 transactions totaling over $42 million in sales. 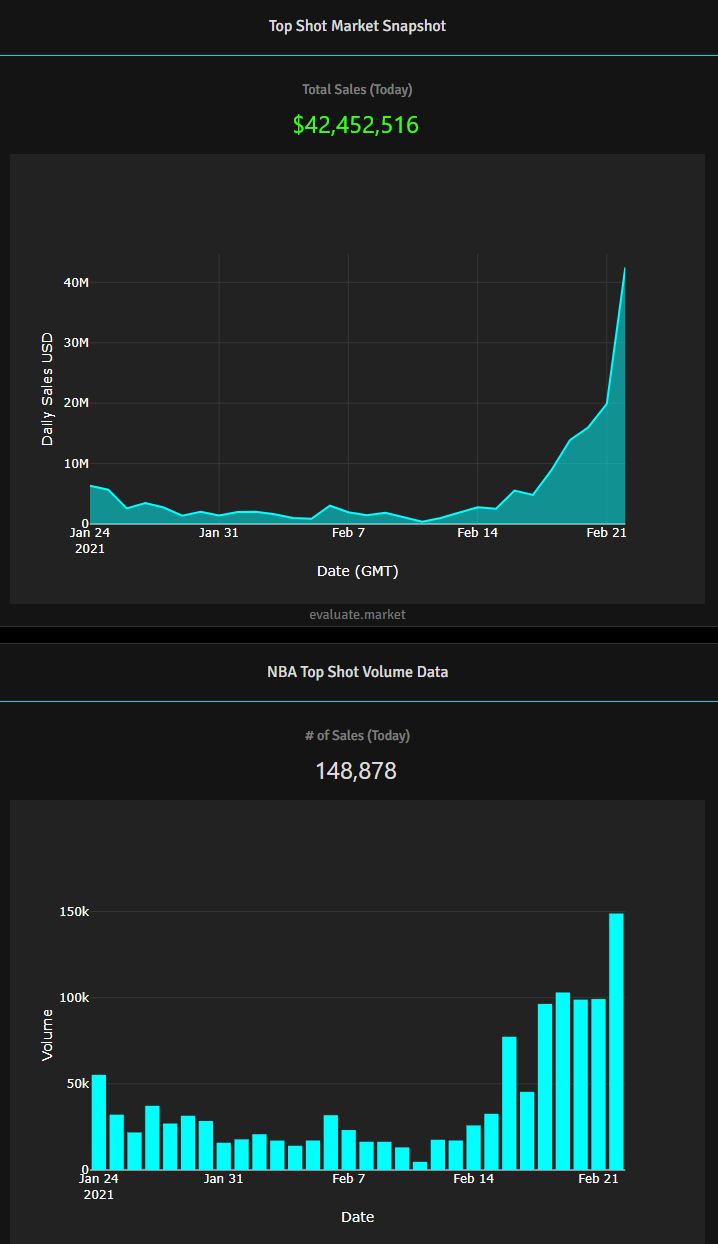 At their core, these particular NFTs are 21st-century sports cards. And like traditional sports cards, they come in packs. I wanted to buy one to find out what all the hype was about, but there weren’t any available!

That’s because when they announce a pack, the entire community rushes to join the queue. And boy, the adrenaline here is something else. I felt it firsthand this Saturday when my friend texted me to get in.

This whole process is fascinating. You join the queue 10 minutes before the line opens, and a clock pops up with a count down that builds the anticipation. 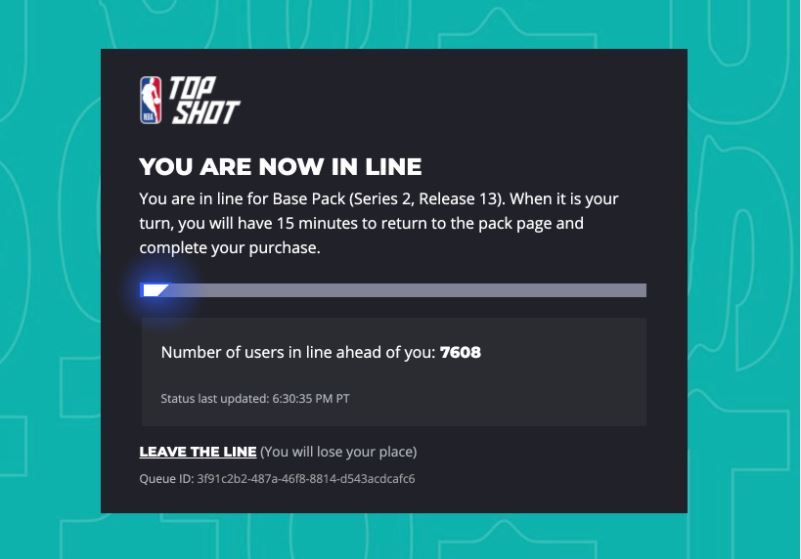 Why are people flipping out to get a hold of one of these things? Because the prices for the cards, aka “moments,” are, in a word, insane. Take LeBron, for example. If you’re lucky enough to get him in a pack, you could be sitting on 5 figures, easy.

Today somebody purchased one of his moments for…$208,000!!  You can see that outlier in the chart below from Evaluate Market. You can also see the price, represented by the dots, trending higher in the last few days. 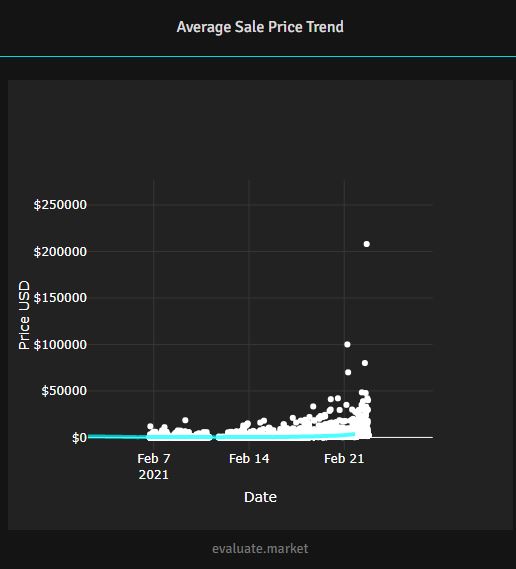 The explosion is crazy. On the one hand, it feels super early. You have NBA guys just now discovering it for the first time (see here and here). On the other hand, it already feels like all the opportunity has passed you by if you missed it with these prices.

These sales happen in the marketplace. A few things determine value. First, of course, the caliber of the player. All else equal, Stephen Curry will be worth more than Draymond Green. Then there is the serial number. Lower is better. If you have the first moment out of 3,000 or whatever, then you’re in luck. Then there is the number of moments for sale. The lower the supply, the higher the value. For example, the lowest ask on a Tyrese Maxey moment is $637 because there are only 130 listed. Trae Young is a much better player, but there are 636 listings, so the lowest one here is $109.  Scarcity, or at least the belief in it, is a major factor here. More on this later.

Alright, now I’m ready to share my story. A month ago, I was poking around the marketplace and found the moment I wanted to buy. This sweet Devin Booker game-winning shot. I’m honestly embarrassed that I paid what I paid, but I’m gonna be honest, it was $2,500. The moment I bought was #113/150, and there were less than a dozen for sale.

But the next morning, I woke up in a bit of a panic, like an “Oh my god, what was I thinking?” type feeling. I jumped out of bed immediately put it up for sale for $2,999.

And then, nothing. I played the waiting game. Over the next few weeks, regrettably, I didn’t follow what was happening. Until I got an email that a “cool cats” pack was dropping.

So I opened my computer, got in the queue, and was the proud owner of my first Top Shot pack. Opening it was a ton of fun. Check this out if you want to see what it’s like.

The pack cost me $14. I didn’t get anything great but was surprised to find what some of these were going for in the market place. I sold a Tyler Herro moment for $155 and grossed a total of $215 in sales on a $14 investment.

And then, a day later, I got an alert that my Devin Booker moment sold. Now I was in business, and I had a decision to make. Do I just take the money and run, or do I keep on playing? Well, taking your money off of the platform is a 6-8 week process at this early stage in the game, so I figured I would let it ride.

Okay, so the big question here, and there are many, but the big one is where is this money coming from?

Some 100k people have more than $1 million worth of Bitcoin. 9,500 hold more than $10 million. So what’s the difference if they spend $50k on a Zion hologram? It’s like a derivative of a derivative. They’re using them as poker chips. And if you’ve ever played Blackjack, then you know that once your chips are on the table, they lose all meaning.

For example, today, I paid $429 for a Duncan Robinson moment. What? Why? Would I ever give somebody $429 in cash for this? No, nobody would. But like I said, when you’re using chips, money loses all meaning. And when you scroll through the other listings, it can feel like you got a relative steal. Absurd, I know. But when you’re swimming in a mania, you feel a little bit less like a maniac. 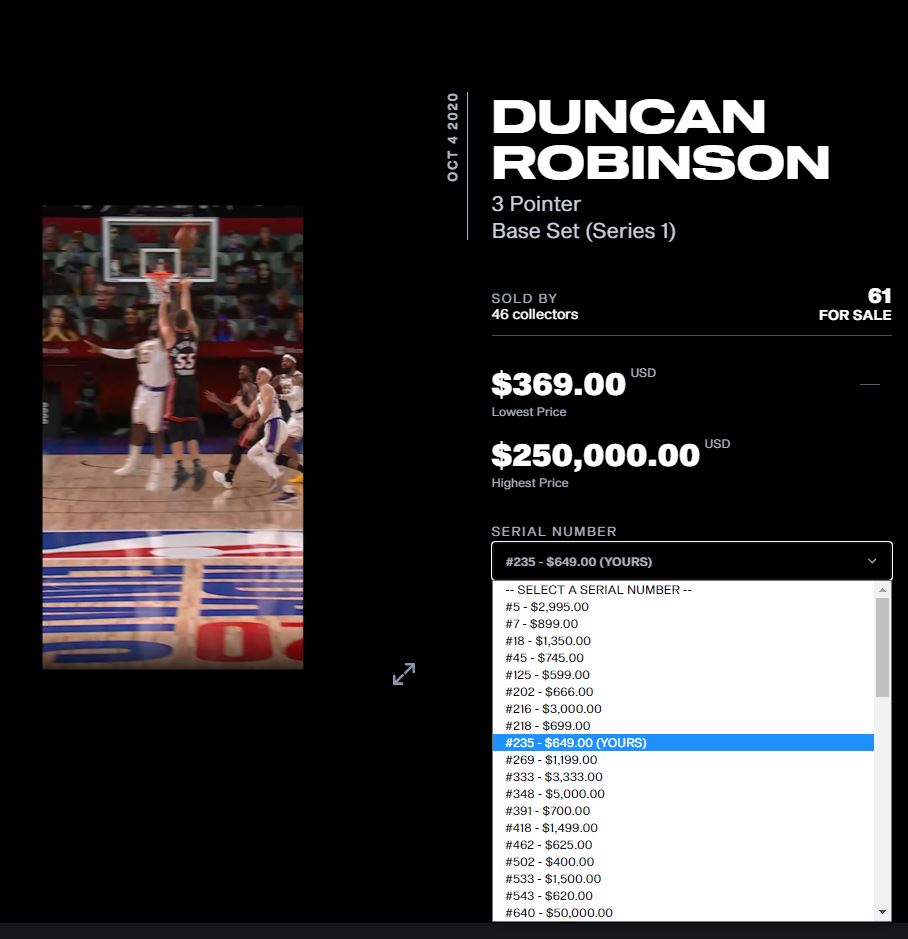 I’m having a lot of fun playing this game, but I know it can’t last forever. I mean, literally, it cannot. I bought a CJ McCollum moment for $425 and sold it 24 hours later for $799. If this were to continue at this pace, it would be worth (lol) over $1 million in 12 days. It has to slow down.

I think what the team at Top Shot is building is super cool, but I’m more confident in prices 3 days from now than I am 3 years from now. My best guess, or the way I’m thinking about it is bubbles don’t form and pop so quickly. Actually, GameStop. But I’m gonna chalk that one up as an exception. This can end tomorrow, but as long as crypto is doing what it’s doing, this thing could keep going way further than anyone thinks possible.

So I’m still dancing while the music is playing. I don’t know when I’m going to leave the ball, but for me, these things are a trade, not an investment. If I lose the $2,500 I put in, that will suck, but I’ll live.

To me, all the questions are a sideshow to the main story here which is the price of Bitcoin and Ethereum. As long as these are rocking, nobody is going to worry about overpaying for NFTs. But Bitcoin has a history of crashing, so if and when that happens, then we’ll really see what these things are made of.