Morgan Housel spoke about this idea, helping to reframe how we think about bear markets and recessions. If you view volatility as a fee for admission to long-term returns instead of a fine for doing something wrong, you have a better chance of riding it out when the going gets tough.

It seems premature to roll out a “don’t panic” spiel, given that the S&P 500 is a whopping 8.3% off its all-time high*, but I hope this post can help people see the big picture if it gets worse before it gets better.

Stocks appear less volatile the less you look at them. The chart below shows rolling returns over different periods. You can see that the swings become less dramatic the less often they’re measured. 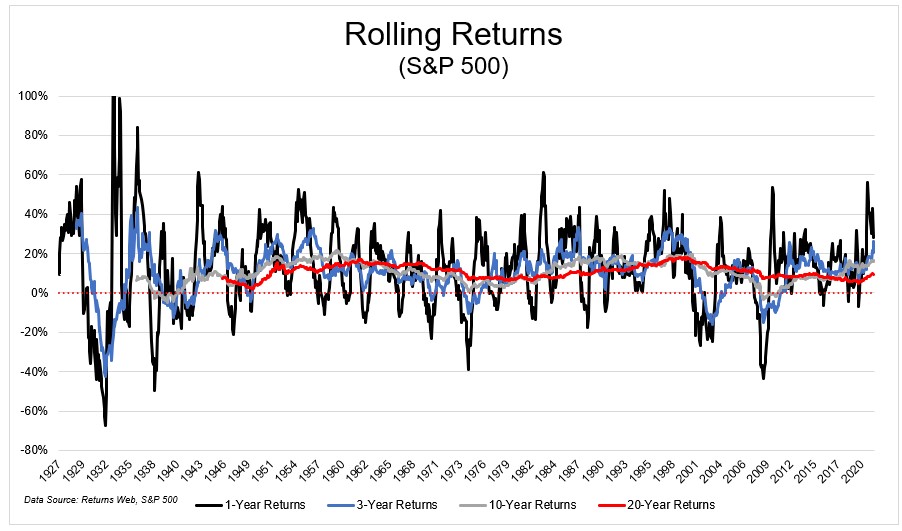 If you can help it, stay away from checking your portfolio when you’re losing money. Stocks won’t stop going down just because you’re looking at them, and the more you see your money evaporate, the more likely you are to do something to make it stop. But an investor’s job is not to avoid the pain but to endure it.

Even though bear markets can take away years of gains, they are rocket fuel for decades to come—a fee, not a fine. I’m not saying you have to be all stocks all the time with no in-between. But you can never give in to fear. You can never panic. You need some framework for dealing with volatility.

There are always reasons to sell, as I’ve written before. Right now, investors are selling because rising rates and high inflation are making people reassess how much they want to pay for each dollar of earnings. You can’t ignore the narrative, but you can put it into context. Do you think this episode will appear on the chart in ten years? In one year? 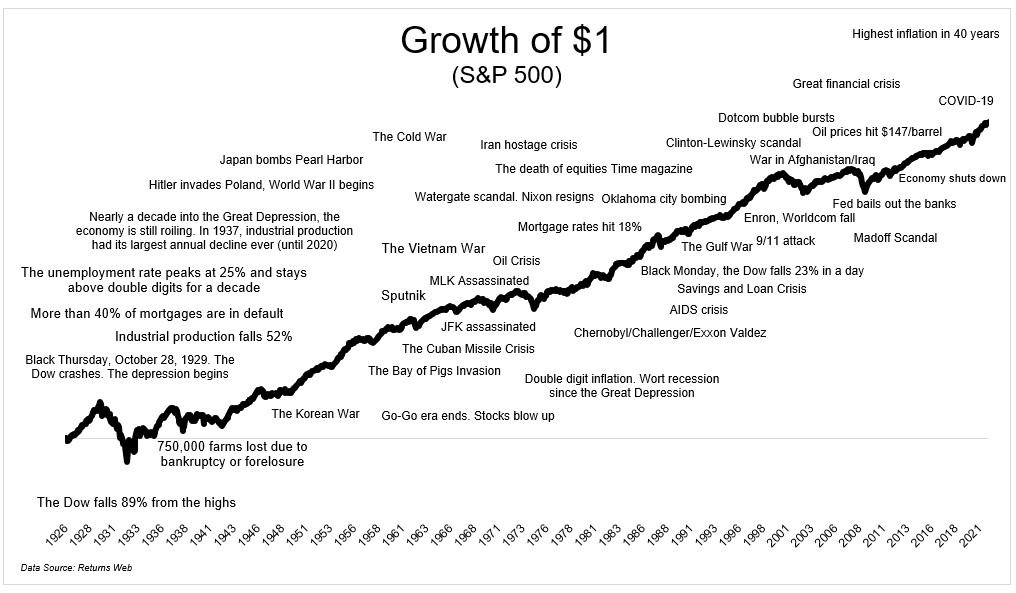 Warren Buffett is a famous investor. People like to quote him, and for a good reason. But it’s a lot easier to listen to him than to behave like him. Buffett’s genius is not only his ability to analyze an investment opportunity, it’s staying fully invested over multiple decades without ever succumbing to fear**. He never sold everything and went to cash***. He never waited for the dust to settle. He never tried timing the market.

Listen, I know not everyone reading this is a billionaire. In fact, I’d even go as far as to say that most aren’t. So you might not have the luxury of being able to watch your portfolio get cut in half. And if a 50% decline will impact you financially or mentally to the point that the quality of your life will decline, then obviously, OBVIOUSLY, you should not expose yourself to the entire ups and downs of the market. You should invest in a way that suits your risk tolerance, whatever that might be.

It’s no fun when stocks are going down. But if you understand, not just intellectually, but in every fiber of your portfolio, that this is part of the deal, then you’ll be well-positioned for when they start to go back up. I don’t know if that’s tomorrow or next year, but I know that in the meantime you have two choices: try and avoid it, or accept the fee. Choose wisely.

**Relax, Buffett nerds. This is not a biography

***True, he dumped airlines at the bottom, but he didn’t dump everything